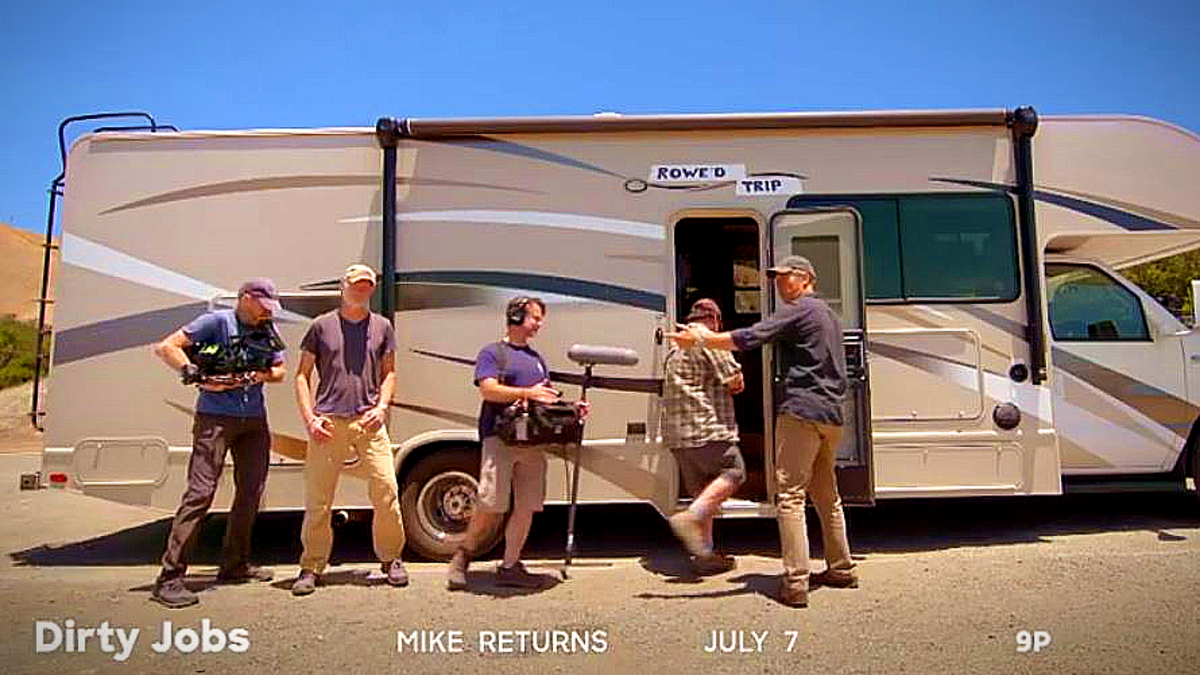 The original band is back for more Dirty Jobs fun on Discovery.

On Dirty Jobs: Rowe’d Trip. Discovery announced that Mike Rowe, the host of the long-running popular series has assembled Dave Barsky, cameramen Doug Glover, Christopher Jones and Troy Paff all back together again with Rowe for a fun four-part series where they road trip and find the jobs that are often unsung and overlooked.

In true Rowe tongue-in-cheek humor, the show is titled “Rowe’d Trip,” as the play in words indicates the show centers on the affable Baltimore native and his genuine curiosity about the folks who make America hum and run, with little to no fanfare.

Part reunion, part road-trip, part look-back-special, and part “where-are-they-now,” according to Discovery, Rowe has a happy reunion with his mates who helped bring the original Dirty Jobs to the smallscreen.

That series highlighted the working people of the USA and the work was celebrated, explained and featured.

Now, everything that made Dirty Jobs a must-see TV series and an “essential” franchise in the first place is resurrected.

Rowe and “the band” now will travel together in a mini-RV and reminisce about the work they have brought to viewers and the great stories and people they have met.

“Dirty Jobs Forrest Gumped it’s way on the air in 2004 and changed my life forever. What began as a simple tribute to my grandfather, has evolved into the granddaddy of “essential work” programming, and I’m humbled everyday by the number of people who continue to watch. Personally, I’ve missed the camaraderie more than anything else – the fun of traveling with a tight-knit crew, meeting the finest people you could ever hope to know, and shooting in all 50 states many times over. Looking back at my favorite moments with the old crew while hitting the open road was the perfect way to reunite, especially at a time like the one we’re all living through now. I know that fans of the show will have as much fun watching, as we did filming.”

On the original Dirty Jobs series, Mike Rowe traveled to all 50 states and completed 300 different jobs.

Now, he and his crew travel across the country to revisit past jobbers and tell new stories.

According to Discovery, each episode will follow a specific theme – Infrastructure, Innovator, Isolation and Animals and lead viewers on an epic road trip, culminating in a stop at a unique destination.

Discovery viewers can check out new episodes of DIRTY JOBS: ROWE’D TRIP each week by downloading the Discovery GO app. Viewers can join the conversation on social media by using the hashtag #DirtyJobs and following Dirty Jobs on Facebook and Discovery on Instagram and Twitter for the latest updates.