Sister Wives fans are calling Mariah Brown out after her partner Audrey Kriss shared a photo of her “babylove” rocking hairy arm pits.

Mariah Brown seemed to catch some heat from the LGBTQ community specifically. They looked to take issue with Mariah being a public icon for their community while rocking hairy pits. Those who responded wanted it to be clear that being homosexual didn’t mean neglecting to shave.

Unfortunately for Mariah, the criticism about her hairy arm pits took place in the comments of the beautiful birthday tribute Audrey Kriss penned for her. Audrey attached a collection of photos to the tribute. And, the second photo featured Mariah with her arm in the air as she held up a pride flag. Sister Wives fans, however, had a hard time seeing anything other than the “nasty” hairy arm pits.

“Look I’m as gay as they come lol but why not shave your pits?” One individual questioned.

The question above was liked over a dozen times as many seemed to agree.

Whether women should or shouldn’t shave is a pretty controversial topic. So, it isn’t too surprising that a debate sprung up in the comments. Many admitted they thought a woman with hairy arm pits was disgusting. Mariah, however, did have some form of support in the comments. 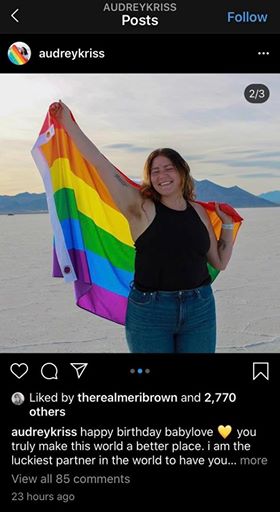 Here’s what those defending her choice not to shave had to say in response.

The LGBTQ community (more specifically the lesbians) noted that they wouldn’t be lesbians if they wanted to be with someone that had hairy pits. On the other side of the argument, some insisted women are not “naturally smooth.”

Overall, Sister Wives fans had pretty mixed feelings on Mariah Brown and her hairy pits. The question is… What do you think about them? Tell us about it in the comments!

Lisa Rinna Struggled To Support Amelia Hamlin And Scott Disick
‘GH’ Spoilers: Sonny Is Back And Furious, Limo Explodes Shakes Up PC
Farrah Abraham Shares Cryptic Quote, Reveals Being Ready To ‘Release Negative Thoughts’ Of Her Past
Hannah Ann Sluss Reportedly Suing Proctor & Gamble, But Why?
Cheryl Burke Dishes On The Future Of Her ‘DWTS’ Career