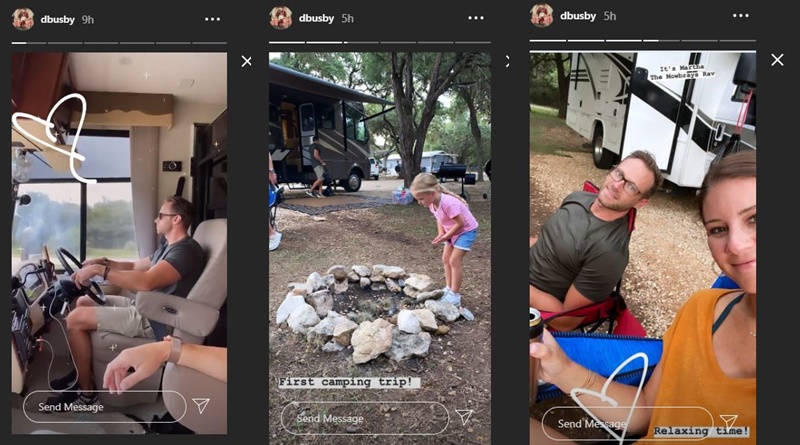 OutDaughtered fans know that the Busby family currently experience remodeling in their home. They went away to Louisiana for a week over Adam’s birthday. But, when they came back, the place still seemed uninhabitable. So, they went off to a water park for a few days. Plus, they spent time at a beach house. Now, they plan for the painting stage of the remodel. So they went off on another small vacay while that happens. This time, they took their first RV camping trip.

OutDaughtered – Busby vacays budgeted for in the costs of the remodeling

We reported that a lot of fans wonder how on earth the Bubsy family affords all those vacations. Bear in mind, that during all their trips away, that included Danielle and Adam visiting Mexico for their wedding anniversary. But, the Bubsy family really did well off their various businesses and the TLC show. Adam told fans he budgeted for the trips away when they planned the remodeling. As we noted, “Their net worth is currently around $4 to $5 million.”

Also, the trips apart from the anniversary really didn’t involve top 5-star accommodation. They rented a bunkhouse when they visited the waterpark. And, they stayed with his family in Louisiana, which probably also helped cut costs. Now, the OutDaughtered family went on their first RV camping trip. Really, what they do with their money isn’t anyone’s business, but fans forever question how they spend their money. Certainly, this looks like one summer the quints and Blayke simply won’t ever forget.

Danielle took to her Instagram and shared about the new first for the kids. She shared a couple of photos, plus a few others on her Instagram Stories. One of those showed kids outside at night hunting for “bugs.” Fans who follow Danielle and Adam know that the kids often hunt around for bugs in their own yard. And, Riley loves nothing more than collecting holding frogs and lizards. So, it looks like the kids enjoyed their after-dinner fun on the campsite.

In a photo showing the RV, Danielle told her fans that she took some special medication or the trip. She usually suffers from motion sickness if she doesn’t drive. And, Adam obviously got them to their destination safely. She also noted that it’s “our first family RV trip!” One OutDaughtered fan asked, “Can’t wait to see the pics of your vacation and RV Danielle! Enjoy! 👌😘.” Well, Adam nearly always puts up really nice videos on his YouTube vlog. So, no doubt all their fans get to enjoy their RV trip on screen as well.

🚨Omg!! He is driving!!! And I’m NOT PUKING!! 🚨If you know me, you know I always have to drive bc I have extreme motion sickness.super thankful for some motion sickness meds, that actually are working, so that I could let him drive this RV, for our first family RV trip! #roadtrip #busbyventures #summer #rvtrip #itsabuzzworld #familytime

Quiet time by the fire for the older kids

Later, Danielle also shared a photo of some of the older kids around the fire. Maybe by then, the quints tired themselves out. And, those OutDaughtered kids take a lot of tiring. The active little kids never seem to stop bursting with energy. Fans agreed that camping in RVs really brings a lot of fun, and it’s more affordable than staying in resorts and hotels. Families especially enjoy it as the kids get out and about without straying too far from mom and dad’s watchful eyes.

As one fan noted, “Family adventures are priceless.” Do you agree that RV camping brings a lot of fun for families? Sound off in the comments below.

What Is ‘Bachelorette’ Katie Thurston’s Net Worth?
Colton Underwood’s Nana Helps Him Find Love On Tinder – Did She Swipe Right?
Are Joe & Kendra Duggar At Odds With Jim Bob Because of Josh?
Jackson Roloff Bonds With Uncle Jacob: See Adorable Photo
Joy Forsyth’s Son Gideon Goes From Excited To Terrified In Sweet Video