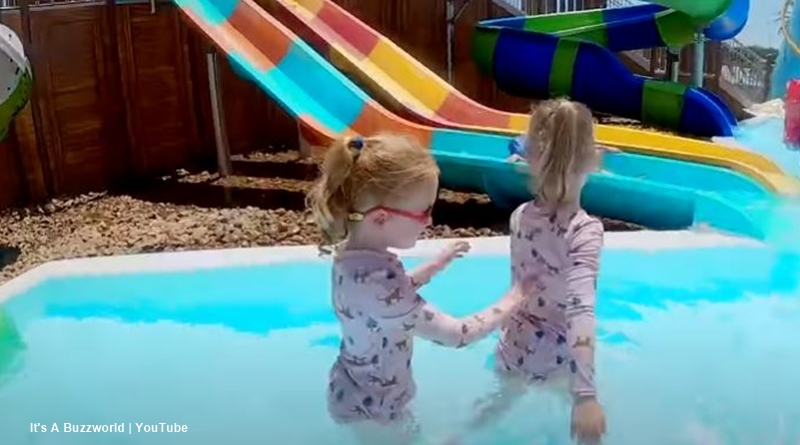 OutDaughtered ended the season early because of the coronavirus. Adam said they plan on filming more episodes due to demand. But, in the meantime, if you hunger for more of the quints and Blayke, he dropped a new video on his YouTube account on Thursday. He said more comes, and the video’s just the first of three.

OutDaughtered – The family filmed their visit to the waterpark

When the Bubsy family returned from Louisiana where they spent Adam’s birthday week, the remodeling at home wasn’t yet finished. We noted that when they arrived back home in Texas, Adam revealed their furniture still covered in plastic sheeting. Many bare walls and ceilings made the home unusable. So, they went off to the Splashway Waterpark & Campgrounds about an hour outside of Houston. As usual, the Busby parents shared photos on Instagram of their mini-vacation.

One photo revealed that Hazel tried fishing. Actually, Adam sounded pleased that she enjoyed it. He said that she finally found something that interests her and it suits her personality a lot. They also shared a lot of photos of the other kids enjoying the slides. The Outdaughtered kids obviously enjoyed themselves very much. And, those fans who can’t get enough of the OutDaughtered kids now heard the news that he made videos of their trip. The first one comes titled as Our Waterpark adventure Part 1.

The first part of their trip went up and it runs for nearly half-an-hour. It certainly looks like those kids had a total blast. And, fans who follow the quints know that not that long back they felt uncomfortable in the water. Well, that fear clearly disappeared. The quints literally act like fish in the water at the park. And, the video’s littered with high smiles and laughter. Before they’d set off on their mini-vacation, Adam revealed the extent of the demo work going on in the house.

But, most of the video takes fans right where they want to be: Out enjoying the fun of the Busby family. Before they went, big sister Blayke obviously decided she didn’t want any squabbling among the quints. She offered them coins for “being nice.” But, if they weren’t, then they had to pay them back. Adam liked the aspect of positive reinforcement. Then, they packed up the van, and the OutDaughtered family hit the road.

Riding the carts to the waterpark from the bunkhouse

The family first went to the bunkhouse and got changed. There, the quints sounded super-excited about their adventure. Then, they went over to the waterpark. They wasted no time getting into all the action. After a long day, the family cooked outside and enjoyed creating marshmallows around the fire.

Did you enjoy the video of the OutDaughtered kids enjoying their time at the waterpark? Will that hold you over until the new episodes arrive? Sound off in the comments below.