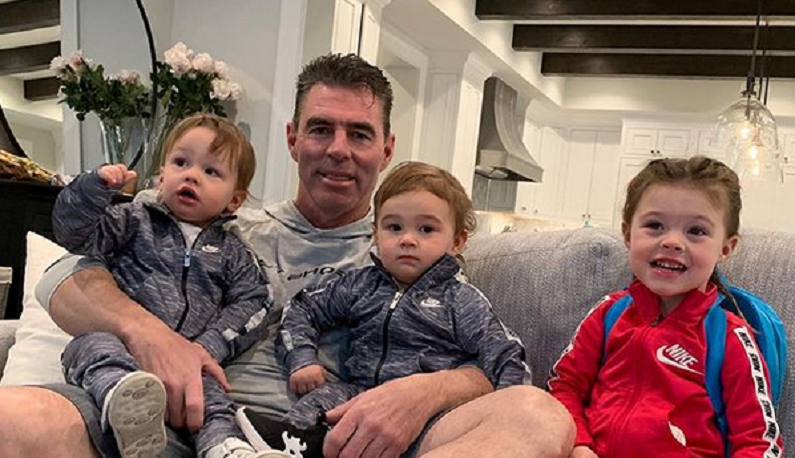 Jim Edmonds has fighting words for ex-wife Meghan King and her new boyfriend Christian Schauf. The former RHOC star slammed his former partner on his Instagram Stories. On Wednesday, July 29, the retired MLB called out Meghan for her narcissism after fans questioned him about his past relationships.

Jim responded with not one, but four memes in which he seemingly slammed Meghan. He referenced one of his exes but didn’t include a name. But it was clear to fans that he was referring to his famous ex-wife. In one of his many Instagram Stories, Jim told fans that a narcissist will repeatedly hurt someone to retaliate and act like the victim.

Per Us Weekly, the 50-year-old shared a series of memes on his Instagram Stories. While he didn’t name Meghan King, it was obvious he was talking about her.

“A narcissist will hurt you and hurt you again and again, waiting for the moment that you retaliate,” one of the memes read. “Just so they can play the victim.”

Then he followed up with a second meme that read, “Those who are the greatest threat to the narcissist will be made out to be the most vilest of monsters.”

The third meme explained the characteristics of a narcissist, such as making “nasty, cruel and insensitive” comments that are “rarely factual things about you.” Then the former baseball player finished off with another meme that said a significant other will call their partner “crazy” after gaslighting, lying, and leaving them.

I took my kids to zoo today and their favorite part was climbing a landscaping wall after they ate their sack lunches. Is this kids or what?! I wanna hear your “kids will be kids” stories 👇🏼

Fans wanted to know who Jim was talking about. He simply said that his followers wanted him to explain his past relationships. As TV Shows Ace previously reported, Jim threw shade at Meghan weeks ago. He called her “abusive” and “loveless” while thank Kortnie for bringing him back to life.

Jim moved on with Kortnie O’Connor. The couple made their relationship Instagram official in April. Meanwhile, Meghan has found love with social entrepreneur Christian Schauf. However, Jim has made it clear that he doesn’t like Meghan’s new boyfriend.

Jim Edmonds’ rep claims that he has never met her new boyfriend. But that hasn’t stopped him from judging Christian Schauf. Christian spoke to Page Six about his relationship with the RHOC star. He explained that the two met on a dating app and he’s never watched a single episode of the Bravo series. Christian also shared his thoughts on Jim.

“This is a 35-year-old woman with three kids under the age of 3 with an ex who is not that easy to deal with – and that is putting it in the nicest way possible – and then having every move you make played out at the scale she does, for her to continue to be positive and push ahead and have goals, and not let it overwhelm her … it’s really impressive to me.”

Traded our hiking gear for normal clothes for the day ✌️

Jim’s rep fired back and released a statement to The Blast. His rep revealed that “Christian has never met or even exchanged one word with Jim.” He also slammed Christian and Meghan for “looking for attention.” Meghan reportedly demanded $1 million dollars in order to sign a non-disclosure agreement. She’d only sign the NDA, which would prevent her from speaking out about her marriage.