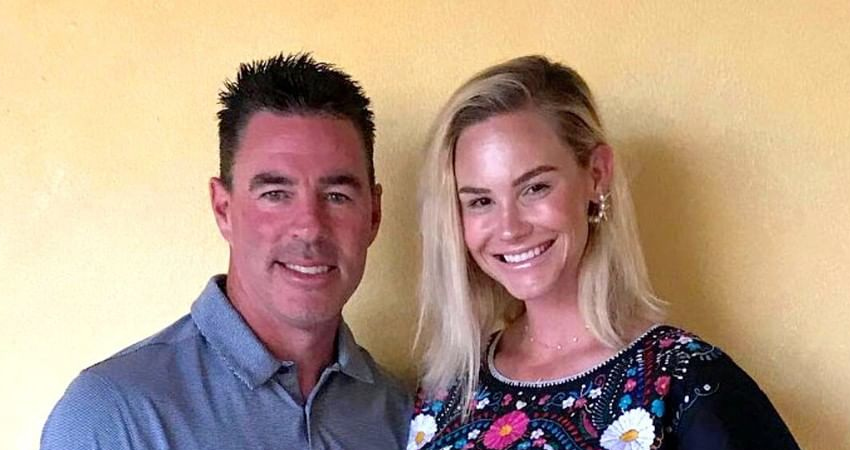 Jim Edmonds is celebrating his new relationship by trashing his ex, The Real Housewives of Orange County star Meghan King. (She dropped her soon-to-be-ex-husband’s name earlier this year.)

In a post paying tribute to his new girlfriend, Kortnie O’Connor, Jim slams his “loveless” marriage to Meghan. He also implies that his new lady love just happened to wander into his life.

The former baseball player took to Instagram to share a heartfelt post about Kortnie. He begins his tribute by writing that he “wouldn’t be here right now” if it wasn’t for “this girl.” He confides in his followers that he was in a “dark place” when they reconnected during a “plus one weekend in Mexico.”

As fans may know, Jim and Kortnie were first spotted together when she accompanied him to his friend’s wedding in Cabo earlier this year. While he moved on quickly from Meghan, he didn’t make things ‘Instagram official’ with Kortnie for a few months.

Jim filed for divorce from Meghan in October of 2019. The former couple had been trying to work through his infidelity but couldn’t. Earlier in 2019, Jim found himself in a scandal after his explicit text messages to another woman went public. However, he still maintains that it wasn’t a physical affair.

After the split, rumors circulated that something was going on between Jim and one of the nannies working for him and Meghan. In fact, he references the rumors in his post about Kortnie. He writes that the “lies and accusations that followed the breakup” put him “deeper in a funk.”

Jim also describes his marriage to Meghan as “loveless and abusive.”

If it wasn’t for this girl, I don’t think I would be here right now. She showed up in my life just at the right time. Amazing that her taking a chance on a plus one weekend to Mexico pulled me out of my hole and changed my life forever. I was in such a dark place; one that I didn’t think could happen to me. I was going through hell ending a loveless and abusive relationship. The lies and accusations that followed the breakup only put me deeper into a funk. Along came this beautiful woman by chance, who lit up my world and brought me back to life. I’m very grateful for my amazing friends, children and this amazing woman for making me a better person and father. #reallife

Back in December of 2019, Meghan opened up with her own claims of abusive and “controlling” behavior.

People notes that they reached out to Meghan after Jim’s post and she gave them a short statement. Taking the high road, she simply says, “I wish him the best.”

Her fans, however, weren’t so forgiving. Many people responded to Jim’s Instagram post by slamming him for his treatment of Meghan. One fan reminded him that the RHOC star went through IVF “alone” without Jim by her side.

However, Jim commented to the fan that he was there “every step of the way.”

While Meghan was slower to move on, she’s in a new relationship now. The former RHOC star is dating Utah native Christian Schauf. Meghan recently wished her boyfriend a Happy 40th with a sweet tribute. She encouraged him to life his “best life every second.”

Christian is the owner of an outdoors company in Utah, Uncharted Supply Co. Despite his success, some fans question his motives. Is he dating Meghan for the fame?

Tell us in the comments if you think Jim’s tribute to Kortnie was disrespectful to Meghan.