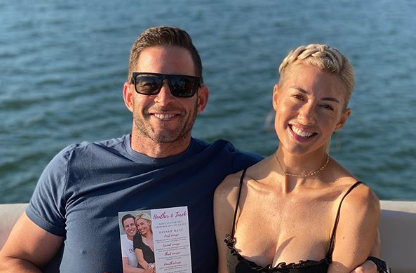 Saturday Tarek El Moussa announced he is engaged to Heather Rae Young who is the star of Selling Sunset. The Flip or Flop star proposed on the couple’s one year anniversary when the two visited Catalina Island.

Tarek made a point to really make the proposal special. He said they really love going out on the boat. The proposal was a complete surprised to Heather. She thought they were celebrating their anniversary.

One of us is having the best surprise weekend of her life 💕🦄Thank you my love @therealtarekelmoussa – Cheers to ONE YEAR!!

How Did Tarek El Moussa Propose?

Tarek El Moussa thought of everything. He waited beneath two kissing palm trees while Heather walked down towards him. He’d lined a path on the beach with flower petals and candles. He took her favorite colors of red and pink into account and also her favorite flowers. The large five-thousand flower arrangement included ranunculus, butterfly lisianthus, roses, peonies, and several of her favorite flowers.

He posted a photo of himself giving her the ring on Instagram. It said, “she said yes! #FlippingHerLastName” Heather posted a picture of her with a unicorn pool float saying, “one of us is having the best surprise weekend of her life. Thank you my love.” Going above and beyond, Tarek secretly went to her parents house in Running Springs, CA to ask her parents to give him their blessing. When she got to him he got down on one knee in a tuxedo.

The night before, he’d had a four course dinner planned at sea to celebrate their anniversary. Heather posted along with a picture of the two of them, “Tarek and I had such an amazing time celebrating our anniversary with a romantic dinner on the boat!” She went on to say, she’s vegan, and it was so nice of Tarek and the chef to take that into account when they planned the menu. Heather posted, “you make me feel special and loved every single day! Cheers to many many more anniversaries!!”

And The Night Wasn’t Over Yet

As if Tarek El Moussa hadn’t already given Heather the perfect proposal and evening, it didn’t end there according to People. They sat down for dinner after in a beach cabana and El Moussa had more flowers inside. The rest of the trip was spent on the water watching dolphins and going on a food tour of Catalina Island.

El Moussa said he picked an eight carat diamond ring because eight is a lucky number. It’s an emerald-cut colorless diamond. He said, “the diamond is perfect all the way around, just like Heather.” According to The Real Ashley’s Roundup, Flip or Flop comes back in a month and a spin-off for Tarek is premiering it’s second season as well. Flipping 101 with Tarek El doesn’t have a premier date quite yet. Fans are just happy to see him thriving.