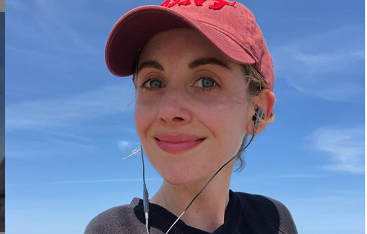 Alison Brie is a very talented actress and depending on who you talk to fans know her from different things. Some know her best as Annie from Community, a show she was on for six seasons with Joel McHale. Others know her from the Indie flick, “Sleeping With Other People,” which she starred in with Jason Sudeikis. Most recently, a lot of fans know her from Glow where she plays a female wrestler.

Alison spoke to People about the likelihood of them returning to filming anytime soon. “We’re a really physical show. When we shut down, I was in a wrestling ring and was in mid-sweat on another person as we were gearing up to shoot a match. We definitely taste each other’s sweat fairly often.” Alison didn’t stop working. She stared in a production called, “The Rental,” directed by her husband,  Dave Franco.

So my husband’s directorial debut THE RENTAL comes out tomorrow and holy shit…I’m so damn proud of him. He made a beautiful, complicated, horrifying film. And I got to be in it! This film is special to me in so many ways and I’m just so excited for you all to see it. Here’s a picture of the two of us on set together. You can see how I never fail to make this guy laugh. 😏 ❤️ #therental Out on VOD & in drive-ins & select theaters!

Alison Brie Said They Had Started Filming The Final Season

Alison Brie told People they filmed some of the fourth season that is to be the last. They started filming the third episode when they had to shut down. She said, “I don’t think we’re going to be one of the first to go back.”

Brie said they didn’t want to compromise the creativity so they will take precautions and really think it through when they start back. Brie misses being on the set of Glow and said they have done a lot of Zooming. She also said there was a, “pretty healthy text chain going,” between the crew and cast.

What It’s Like Working With Her Husband On A Movie

Being in a movie directed by her husband, Dave Franco is different for the actress. Set up by a mutual friend, the two had an instant connection when they met at Mardi Gras. Alison Brie said, “I enjoyed watching him work with everybody and seeing the crew fall in love with him because he was so collaborative and so passionate.” She enjoyed it so much the two wrote a rom com together for him to direct and her to star in. After the success of working together on a horror the two are chancing it again. Quarantine gave them time to work on it.

According to Entertainment Tonight, she said, “no one’s winning Oscars for romantic comedies. There’s a little bit of a stigma and we were like, ‘Oh no, you can make them and they can be really good and the characters can be really grounded and real and go on a journey and they can look beautiful.” Fans can watch Glow on Netflix and catch up before the final season is released. Brie and her co-stars give an entertaining and action filled performance perfect to binge during quarantine.