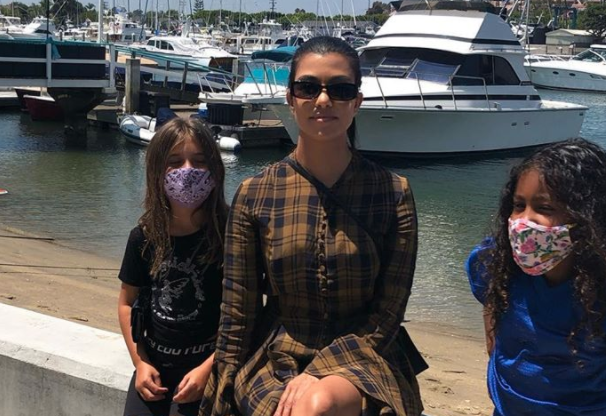 Kourtney Kardashian was seen taking Saint and North out on a trip. This comes while their dad talks about running for president and draws a lot of media attention. It seems like this was a ploy to distract his children,

Kourtney Kardashian goes on a trip

Aunt Kourtney swooped in to save the day and took Kim’s two oldest children to Balboa Island while their dad deals with a Bipolar episode People says. From the looks of it, Kourtney did a great job distracting them and they really looked to have fun. Of course, Kourtney documented the trip on social media.

“Haven’t been back since I was a little girl and it hasn’t changed 😊✨,” she wrote in a caption of a photo from the day trip.

Penelope can also be seen in some of the photos so it’s clear she also got to enjoy the trip with her cousins. There was also a photo of Reign and Saint getting to pick out candy. It honestly looks like they had such a good time together.

Last weekend, Kanye hosted a rally in South Carolina. During that, he talked about how he wanted to abort North originally. Apparently, Kim was furious that he brought this up as it was very private.

“Kim is shocked that Kanye spoke about North at the rally,” a source said about the situation. “She is furious that he shared something so private.”

Since Sunday, Kim has taken to Instagram to explain just a little bit of what is going on. At the end of the day, it seems like this is very hard on the family. Kim is basically just asking for respect.

“As many of you know, Kanye has bi-polar disorder,” Kim said on her story. “Anyone who has this or has a loved one in their life who does, knows how incredibly complicated and painful it is to understand. I’ve never spoken publicly about how this has affected us at home because I am very protective of our children and Kanye’s right to privacy when it comes to his health. But today, I feel like I should comment on it because of the stigma and misconceptions about mental health.”

Have you been following Kanye on this journey? What do you think of the whole situation? Let us know what you think in the comments below. Come back to TV Shows Ace for more news on the Kardashian family and all of your favorite reality TV stars.