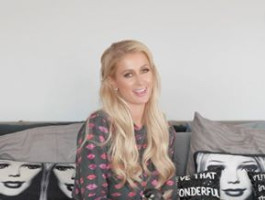 Socialite and reality star Paris Hilton has been the butt of jokes for years. Her reality show antics made the general public question her intelligence. One could argue that she was once the most well-known reality star in the country. However, in the years since, her fame has been overshadowed by former assistant Kim Kardashian.

In the early oughts, Paris started alongside actress Nicole Richie in the Fox reality show The Simple Life. The series spent three seasons on Fox before moving to E! for a final two seasons. Paris coined the phrase “That’s hot” while appearing on The Simple Life.

While Nicole and Paris were best friends in real life when the show started, they were barely friends by the end. In fact, their falling out is part of the reason why Fox chose not to continue with the show after Season 3.

On the show, Paris acted like a dumb, spoiled Princess. As a result, that image still follows her to this day, despite the fact that she’s almost 40-years-old.

This is Paris Intends to Show Fans Her True Self

Paris is the great-granddaughter of Conrad Hilton. Yes, from the hotel chain. She grew up in a lavish lifestyle, but she’s not just a little rich girl. With her new YouTube documentary, she wants people to get to know her.

On Tuesday, July 22, Paris was a guest on The Jimmy Kimmel Show. With Jimmy Kimmel on vacation, comedian Nikki Glaser was hosting the show. During her appearance, Paris gave viewers a glimpse at the upcoming film. Per E! Online, Paris laments in the clip that “No one really knows who I am.”

While people may know her name, they don’t know her story. The former reality star seeks to change that with a look into her real life.

In Documentary, the Reality Star Reveals Enduring a Childhood Trauma and Bullying

During the documentary, Paris delves into her experience at a boarding school in Utah as a teenager. She recounts her experiences with bullies at the school.

More surprisingly, the House of Wax star reveals a previously undisclosed childhood trauma. While the preview clip provided to the late-night show doesn’t give details, she does say no one knows about it. In fact, she “never” talked about the traumatic experience with anyone.

E! Online reports that Paris’ sister, Nikki Hilton, and mother, Kathy Hilton, will appear in the documentary. Additionally, Kim Kardashian will also feature. As fans knows, Paris is the niece of The Real Housewives of Beverly Hills star Kyle Richards. Kyle will also be in the movie.

This is Paris premieres on her YouTube channel on September 14.

Justin Duggar’s Wife Claire Spivey Shows Off Transformation [Pics Inside]
Emma And Alex Make A Dating Profile For Their ‘Bossy’ Sister Anna
Savannah Chrisley Gets Scolded By Fan For Wearing Barely Nothing?
WOW! Jackson Roloff Shows Off His Amazing Talent
Does Bennett Jordan From ‘Bachelorette’ Regret The Argument With Noah Erb?