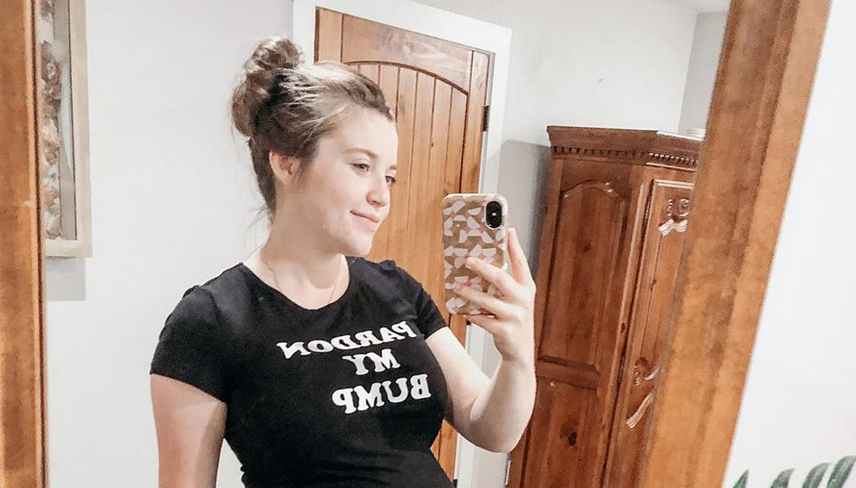 Joy-Anna Duggar and her husband Austin Forsyth are preparing for the arrival of their daughter. The baby will arrive next month. On YouTube, Joy shared a video of herself packing her bags for the baby’s birth. She also chatted with TLC about her pregnancy.

Joy says, “I’m feeling good and tired. Austin has helped me out a lot this pregnancy because Gideon is kind of getting into everything now. It’s hard to keep up with him when I’m big and pregnant, so Austin has been able to help more with Gideon, cleaning around the house and going to get me water… it’s great!”

Austin adds that they are “so excited.” Then, he continues, “I can’t wait to be a family of four!”

As Joy approaches her due date, she’s currently nesting. The couple’s two-year-old son Gideon is now in a toddler bed so that the new baby can use the crib. The couple still has a few things to get together before the baby arrives, but Joy says that they are “pretty much ready.”

In a new YouTube video, Joy shows viewers how she’s packing the hospital bags. This might come as a shock to Counting On fans, as some of the Duggar daughters opt for home births. Joy’s first birth was a home birth. Then, she tragically lost a baby at 20 weeks gestation and delivered in the hospital. This time around, she’s having a hospital birth.

And, the new video shows her preparing for the birth. She packs a bag for the baby and a suitcase for herself and Austin. In the video, she highlights some of the items she’s excited to try out with the new baby. She shares about a nursing cover her friend made. She also talks about what the baby will wear for her first pictures.

Sadly, Joy’s parents and sisters won’t be able to be there for the birth. The Duggar daughter is hopeful that her family can still see the baby shortly after birth. She says, “But hopefully we can get a room that has a window and maybe they can come see her through the window. That would be really special if they could at least see her the day she was born because my parents have always been there for me and Austin’s parents, so we’ll see how that works out.”

What will Joy and Austin name their daughter?

As reported by TV Shows Ace, the couple isn’t naming their daughter until she arrives. So, they aren’t telling fans until she’s born either. Joy and Austin aren’t talking about this decision publicly, but they likely have a list of possible names for their daughter. They might just want to meet her or see what she looks like first.

So, what do you think of Joy and Austin’s update? Share your thoughts below.

Don’t miss the Duggar family on TLC’s Counting On on Tuesdays at 9/8c.

‘Days of Our Lives’ Spoilers: Charlie’s Killer Revealed
Jedidiah Duggar & Katey Nakatsu Soak Up The Sun On Their Honeymoon
‘The Young And The Restless’ Spoilers: Victoria Goes After Adam
‘Sister Wives’ Janelle Brown Has ‘One Of Those’ Days
Jeremy Vuolo Lashes Out About Split Rumors, Defends Relationship