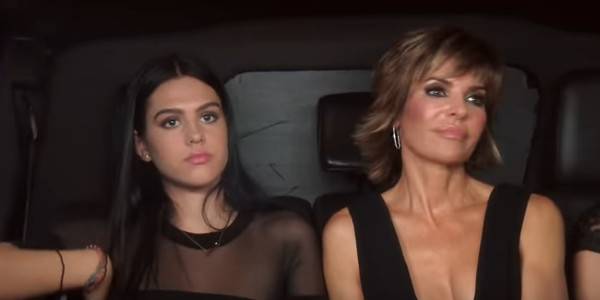 The Real Housewives of Beverly Hills viewers are used to Amelia Gray Hamlin turning heads. The daughter of Lisa Rinna and heartthrob actor Harry Hamlin is a professional model, after all. However, her new post on Instagram Stories is turning heads for another reason. She reveals a bombshell claim that her mom ‘forces’ her to appear on the Bravo show.

Amelia’s shocking claim came about when she took to Instagram Stories to clap back against a Twitter troll. The troll accused Amelia of faking her anorexia for “more airtime” on the RHOBH. The tweet came from a user named @thingsithinkbutcanttweet on Sunday, July 19. The troll wrote that “@ameliagray lied about being anorexic on national television.” The post alleges that the lie was to get “more airtime.” However, “Denise [Richards] ruined that.”

As RHOBH viewers know, Denise’s drama with the other women and Brandi Glanville is taking up the bulk of airtime. Inquisitr reports that so far on Season 10, Amelia has only made a handful of appearances. According to her response to the troll, her appearances are not by choice!

Amelia took a screenshot of the Twitter post and shared it on her Instagram Stories. She wrote a rebuttal underneath the tweet to express her outrage at the accusation. First, Amelia strikes out against the idea that someone would lie about a mental illness, referring to anorexia.

Furthermore, she writes, “Sorry but I’m forced to be on the housewives [RHOBH] by my mom.” She further states that it’s the “last thing” she wants to do. Amelia ends the post with a simple “f**k you” to the troll.

The occasional RHOBH guest star opened up to her followers about her struggle with anorexia in 2018. Some of her struggles played out on Season 9 of the show, including her refusal to eat when her father tried to get her to “eat something.”

In the 2018 post, Amelia shared two different bikini pics taken one year apart. In the first picture, she’s wearing a red bikini, looking lean, but healthy. Swiping right on the Instagram post reveals a photo from a year earlier.

In the second pic, she’s sporting a white bikini. The model looks bone-thin. There is a stark difference in the photos.

I feel comfort with finally posting something that I wish I was confident enough to post long ago. I’m getting many comments comparing my body today vs. my body last year. I think that the support from my followers has really pushed me into writing this. Anyways, last year at this time there was no doubt that I was not okay. Not only physically but also mentally. I feel like sometimes people forget that just because your job involves being in front of the camera, doesn’t mean you can’t have bad days. We’re human. All of us. Instead of people ever commenting on my mental stability, people commented on my weight. Usually, when people are struggling with an eating disorder it stems from your mind, and your body is a reflection of it. I could go on and on about that time of my life, but the most important part about it was waking up one morning and deciding to stop sabotaging myself. My health, my physical health, my mental health and everything about myself. Once I got the help that I needed, shortly after the second photo was taken, I began to try to love myself for me. I am SO beyond humbled and grateful to have the platform that I do at such a young age, and to wake up every morning with a little girl reaching out to me and telling me I am her inspiration, really makes me feel like I have a purpose. I went through this journey not for attention, not for people to pitty me, but to help. I am on this earth to help people, and I know that. One in 200 women in the US suffer from anorexia. And I want to help. The first photo, taken today is not a photo of the perfect girl. That is a photo of me, trying to figure out my body, and owing my curves that I naturally have, and not forcing myself to starve them away. I have a lot of health complications after starving myself for so long so it’s going to be a journey that I go through for a large part of my life. I still have an extremely healthy life style and I workout so hard all week to maintain my Body. Not to say that recently being diagnosed with hashimotos has also been an extreme challenge for me to balance when still getting over this part of my life, but I am getting there. One day at a time. I want to help.

Accordingly, fans commended Amelia for being so vulnerable to show the photos. Unfortunately, there are trolls everywhere on social media.

Amelia swiftly dealt with one troll. Her number of fans outweighs the number of trolls. Her fans often flood the Instagram comments section of Amelia’s content to praise her beauty and strength.

Are you surprised by Amelia’s assertion that she’s ‘forced’ by Lisa Rinna to appear on RHOBH?

Lisa had yet to comment on the accusation. However, fans often call her out for being a terrible influence on her daughters.