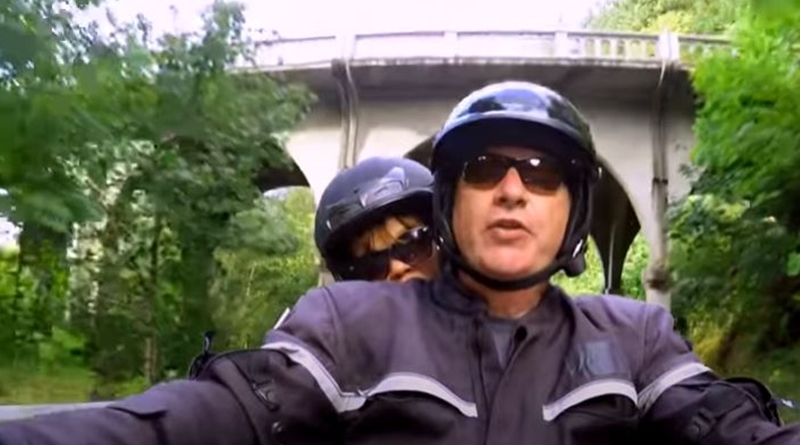 Amy Roloff and Chris Marek met at a party. He took her for a ride on his bike and literally swept her away into a new life. And fans love the way he took her into an “entirely different world.” For season after season of Little People, Big World, fans saw Amy raising her kids. They followed her anger and pain over the divorce from Matt Roloff. And, they watched as she dealt with an ex-employee who settled into a new life with her man. But then, she met Chris and everything changed.

We reported that Amy and Chris don’t live together all the time. He visits her often and sometimes stays the night. He helps her with fixing up her new home. Now get out and about a bit more as COVID-19 regulations relax a bit. Fans know that Chirs loves riding his bike. Recall when she met him? At the time, she told the cameras that her friends wanted to introduce her to other people. Amy sounded happy when she threw a pool party and three people arrived on motorcycles.

Amy Roloff sounded thrilled that people showed up. She said she could “do that every other weekend.” For the first time in ages, she “had fun.” Chris chatted with her at the party and invited her for a ride. Really for Amy that seemed like a first date. They went off for a bike date. Amy felt he brought a different perspective to her life. Chris told her they get out often with friends and go for a ride together. He described it as a mini-vacation. Now, three years on, they went for another bike ride.

At first, Little People, Big World fans suspected Chris Marek only wanted a relationship for her “money.” But they endured, became engaged, and plan their wedding for next year. Over the weekend, they went out for another bike ride. Amy shared several photos of them out with their bikes and some friends. She explained, “What a gorgeous day for a motorcycle ride. 😎. ” Then she said they joined friends and celebrated a birthday for one them.

Amy Roloff ended by saying, “Love riding with my man Chris.” Plenty of her followers noted that Amy looks totally different these days. Wearing her jeans and leathers and a huge smile, the old Amy’s seemingly gone. Her fans like that she got out of the kitchen, baking, and tiptoeing around Matt’s bad temper. In fact, they noted that Chris Marek opened up her world. And, it’s entirely different from life on the farm.

One fan commented, “What an ENTIRELY DIFFERENT WORLD MR. HANDSOME😉 CHRIS🎉 has given you!! I LOVE to see how HAPPY YOU TWO are.”

What a gorgeous day for a motorcycle ride. 😎. It’s been awhile since our last ride and Chris and I were definitely looking forward to getting out on the road again. We headed to Detroit lake and the road less traveled was spectacular. Always nice to have a few rider friends join us and be able to celebrate another’s birthday. What a great day. Oh, and who cares about ‘helmet’ hair 😆. Love riding with my man Chris ♥️ #storyofamyrandchrism #indianmotorcycles #ontheroadagain #adventure #stayingsafe #lovetoride #togetherness

Many fans hope that one day, Amy and Chris get their own spinoff with TLC. Would you enjoy that? Sound off in the comments below.