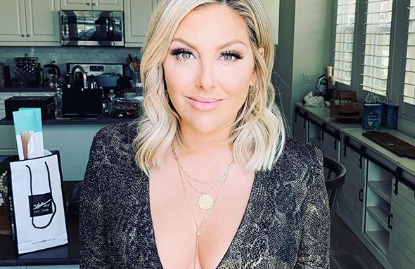 Gina Kirschenheiter of RHOC and her ex-husband Matt have been in a battle over money for a while. Last year the court had her ex pay ten thousand a month in child support for the three children they have together. Matt said Gina had an increase in her income and needed to be paying him instead.

Recently the two decided on a new deal for a settlement where neither of them have to pay the other. Gina let Matt stop with the monthly payments and took a lump sum of $230,000. He also wouldn’t be getting anything from Gina in return.

Just having one of those days over here 😝🤦🏼‍♀️ #outoffocus

Gina Kirschenheiter Finally Reaches An Agreement In Her Divorce Settlement

Gina Kirschenheiter has been in a public struggle with Matt since filing for divorce in 2018 after eight years together. There had been a few reunions between the two, but they usually ended in an explosive way. Matt was arrested for falsely imprisoning Gina and causing corporal injury according to The Blast.

He is still waiting on the trial for those accusations which he pled not guilty to. He could go to jail for up to seven years on both charges. While paying the $10,000 a month in child support, Matt was only allowed visitation. Gina maintained primary custody. Matt begged the court not to make him pay because Gina was getting so much more for the Real Housewives of Orange County. He also maintained he’d lost his job because of the media attention on the domestic violence charges.

According to Bravo TV Gina knew why her marriage didn’t work. She said, “he’s just not that person who compliments you and builds you up and makes you feel great. I’ve never walked out of a room and had him say, ‘Oh my God, you look so beautiful.’ You know, I’ve never even really had Matt look me in the eye and tell me in a genuine way, ‘I love you.’” She went on to say she has seen him tell their daughter that. It made her realize she loves him and he’s a good dad, but not the right man for her.

Gina May Show Off Her New Boyfriend On The Show

Gina Kirschenheiter confirmed on her Instagram she was filming the new season of RHOC. She captioned a photo, “poof! Back at it! From my garage but still.” She said her confessionals would be set up in her garage. It should be interesting to see the cast filming during a pandemic where a lot of places are still on lockdown.

Gina might introduce the world officially to her new fiancé, Travis Mullen, on the show this season. Fellow co-star Kelly Dodd will be bringing her new man on for the season. Together the two have six children and fans can’t wait to see them together when they watch. With Gina, Braunwyn Windham-Burke, Kelly Dodd, Emily Simpson, and Shannon Beador will be returning for Season 15, but it will look a lot different than past seasons. Now with the court battle over, Gina will be able to get on with living her happy life.