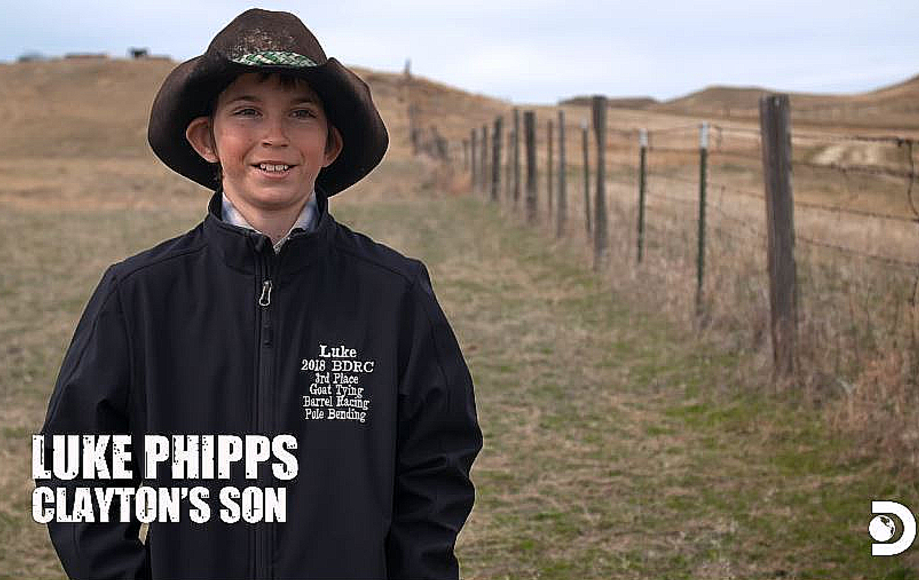 Montana rancher Clayton Phipps and his son Luke Phipps are center stage for Discovery’s summer hit Dino Hunters, a series that shows how to reinvent your career and do something meaningful for science and collectors alike.

These Montana and Wyoming fossil hunters work together combing the North American Badlands for the remnants of creatures that once were, and no longer exist: Dinosaurs.

At age 13, Luke Phipps is the youngest fossil wrangler and has made significant discoveries, including a triceratops named for him, back in 2017.  He’s being doing the searching and recovery since early childhood.

Their team often times works with academics, as they coordinate efforts to help recover these bones before the erosion and weather reduce their fossil finds to dust.

For that, their work is valuable as the sheer size of the area they are working is nearly impossible for academic teams to send in paleontologists and archaeologists to set up dig sites.

His dad Clayton Phipps discovered that the land his family owned had a lot more to offer when he found his first dinosaur fossil back in 2003.

Only three years later, Phipps found the epic fossil specimen, dubbed the “Dueling Dinosaurs.” With deep roots in Montana, Clayton and Luke love the land they are part of and have no plans to stop doing what they love, wrangling fossils out of the dry soil to get them into the right hands for preservation.

It’s important to remember that these fossil discoveries that are excavated and saved from being dissolved by the elements offer not only a living to these ranchers, but added specimens for museums, academics and even some private collectors to preserve forever.

TV Shows Ace spoke to Luke Phipps about his fun life hunting fossils, and working hard on the ranch:

How old are you right now?

Luke, how old were you when you knew the dinosaurs were your thing?

Luke: There was not really an exact turning point, it was just kind of always one of those things. I just remember fossil hunting forever. Just kind of what I’ve always done.

What was the very first fossil that you found?

[Father] Clayton Phipps: The one I remember him finding was when I was carrying him on my shoulders. We were out hiking, and he was with me all day and he was probably three or four years old.

I found this piece of turtle shell. So I called him over and I said, ‘Luke, Look at this turtle shell.’ And he said, ‘Oh, what about that?’

And about six inches away he was pointing at a nice raptor tooth…And he found it and I didn’t. So that is the first one I remember him actually finding, I’m sure he found other little pieces before that, but that’s the one I remember.

Luke, Do you have other friends who are into looking for fossils the way you are? Or are you a lone ranger?

Luke: Oh, not really anything else. My friends would rather be a roping or something like that. I enjoy getting out with them. So we do that but I have some cousins that like to look for fossils too. But that’s about it.

What’s a typical day like for you on the ranch?

Luke: It really depends on where we’re going today. If it’s winter time. We’re going to be feeding cows and chopping wood. If it is summertime, it’s a little bit more laid back. You can just kind of sit around, maybe go rope steers, maybe going at a friend’s house. Maybe go swimming at the reservoir.

What’s the most annoying ranch chores you really would like to never, ever have to do as an adult.

One of the most exciting things about this premiere season is your discovery of the triceratops. Can you just kind of parse it out a little bit for us, what was it that you first saw and then the events that happened afterwards?

Luke: I was walking along a bank where out there was a fossil and I found a couple of these little pieces and they don’t think much of a kind of those two.
They’re pretty common. They’re pretty much everywhere.

But I came up the hillside where the main source had been eroding out. And then I found some vertebrae where three ribs are coming up and out of the dirt, and they were kind of articulated. So I went back and got my dad who was working on another site, but it didn’t really turn out so we came back and started digging on it.

You’ve excavated the Triceratops. It’s back in 2017. This is the one that they called Luke. I understand that you guys sold that. How did it feel, selling your fossil?

Luke: Well…I was okay, but I did not get to go and see it anymore. The big Triceratops skull just looking back at you in there.

Now, you found another Triceratops. Talk to me talk about that.

Luke: Yes, that one, my dad stopped to look at some little chunks of bone and I did my normal routine of running a couple of steps ahead of him and then I saw the big brown horn laying there. And I was like, yes!

Okay. What’s the dream possible that you really want to find? Is it the T Rex?

Luke: Oh, probably a Raptor, honestly. Something that is a little bit smaller and easier to dig out.

Luke: Probably not. I would probably just keep doing what I’m doing. I am thinking of buying a little house like a little rental shed or whatever, get one of those and then just parking it on top of a Hill and surrounded by a rock formation. And then just everyday going out looking for and finding stuff and maybe run a few sheep.

When people watch the show and they react, do you have people coming up to you now saying, Hey, I see you on TV and how do you, how do you handle your newfound fame?

Luke: Oh, most people that already know me, know me. I’ve never had a stranger approach me, but around here they all have known me most of my life.

What do you wish people that weren’t familiar with Montana knew about your state? What are you most proud of and that you wish people had more understanding about where you live?

What place in the world do you want to see?

Luke: Maybe going to Mongolia and seeing the fossils over there.

Any last words to other kids who want to hunt for fossils?

Luke: Good luck! And I hope you find something.

When Clayton Phipps begins breaking ground on the Therapod site, his son Luke finds something extraordinary. Catch the series premiere of #DinoHunters TONIGHT at 9p!