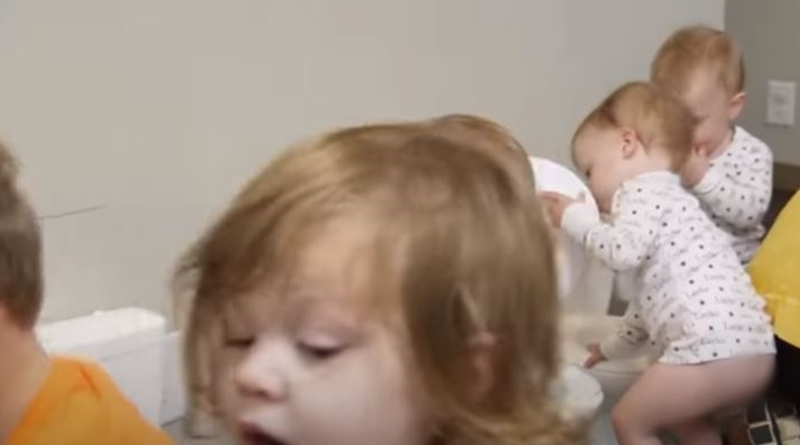 Sweet Home Sextuplets aired the frustrating time that Courtney Waldrop went through with potty training the kids. Driven to despair, she eventually gave up on the idea as chaos reigned. And, it all want down in their temporary trailer home. Some fans thought her crazy even thinking about potty training six kids under the age of two. But, others expressed their unhappiness with the nudity scenes shown by TLC.

When the trailer for the new season came out, we noted that the potty training could be reminiscent of the OutDaughtered quints. But actually, way more chaos ensued with the sextuplets. While living in the trailer home, for some reason, Courtney decided it’s the ideal moment for potty training. Each kid got their potty set up. But, some of them couldn’t associate it with what she wanted from them. An impossible task faced her as none of them sat still on the potty. Crying and tantrums started up.

Eventually, she turned to her friend Valerie. They tried training only two kids at a time. But, the chaos continued. Eventually, the Sweet Home Sextuplets mom gave up in despair. She even bribed the kids with M&M’s Meaww noted. But the kids all ignored her. Potty training kids involves taking off underwear and diapers. Everyone saw a baby bottom at some stage in their lives. But, many fans felt the nudity went beyond the pale.

Fans comment about nudity and little kids on television

On Twitter, as the show played out, many fans commented their thoughts on the episode. Quite a lot of them disliked the fact that TLC showed the kids with no pants on. One fan wrote, “My fiancé is watching the show & the potty training scene is showing the babies bottoms. With all the child abusing freaks out there the least that could be done is to blur it out!” Another critic also felt TLC did the wrong thing.

They noted, “I’m against any amount of nudity for any reason when it comes to children and babies. I just care abt the well being of children and I will never apologize for it.” Meanwhile, others slammed the chaos and blamed Courtney for it. One Sweet Home Sextuplets critic talked about making the kids go all at the same time. They wrote, “Why do they need to have 6 potties for this? 6 babies do not have to go at the same time all the time. It’s not like they’ll have 11 d*mn toilets in their remodeled home. Just put the child(ren) on a few potties who express they need to go, plain and simple!”

This scene is so damn unsanitary on too many levels. They put their sippy cups in the potties! And more! Smh. It's not their faults this whole potty training scene was chaos, it's Courtney's. When the hell is she gonna do something in a logical way?! #sweethomesextuplets

What are your thoughts on the disastrous potty training scenes? Sound off in the comments below.