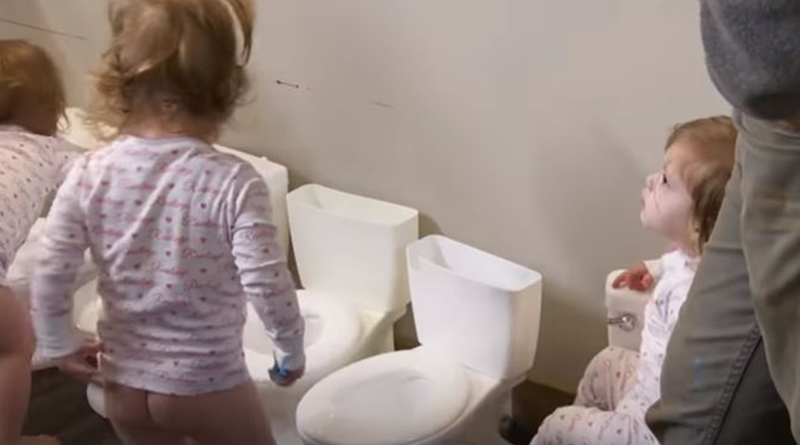 Sweet Home Sextuplets returns to TLC on June 16. Season 3 reveals the kids now reach their terrible twos early. And, fans see them going through potty training. The Waldrop family of nine kids gets noisy and the kids start showing their personalities. Actually, the sextuplets seemingly hunt for dominance as they get into fights and scraps.

In the trailer for the show, fans see the kids bicker a lot. Now standing, toddling around, and into establishing who’s the boss, it sounds a bit chaotic. Actually,  Season 2 premiered in May last year and some fans found it exhausting.

Eric and Courtney Waldrop’s large family of 11 (nine kids), saw the added complication of nine puppies! Their combined birthday party as all the kids were born close to each other in terms of months, had fans on Twitter finding the whole thing rather stressful to watch.

TODAY reminded their readers that right since season 1, the kids exhausted their parents. And, this season brings much the same sort of out-of-control kid-packed energy.  The new season’s also complicated as the family moves into a smaller place when their home gets renovated.

They move into a trailer home. The three bigger boys, Saylor, Wales, and Bridge, their siblings and mom and dad stay in rather cramped conditions. Adding to the terrible two’s along comes the issue of six kids all going through potty training in Sweet Home Sextuplets.

Fans recall the unsettling scenes of the OutDaughtered quints going through the same thing. It seemed that everywhere mom Danielle turned, it involved kiddie poop in inappropriate places. No doubt, fans see much of the same with the three girls and boys belonging to the Waldrops. From the trailer, it looks like Courtney and Eric really do have their hand full in Season 3. Other scenes show the older boys start karate classes. But, one issue already working up fans involves scenes where they take kids outside while wearing leashes.

Sweet Home Sextuplets fans commented a lot about it on YouTube. In the show, Courtney said she knows that leashes bring controversy. People associate leashes with “dogs.” Someone even confronted Courtney about it in the park. On YouTube, one follower wrote, “I normally can’t stand when I see people put their kids on leashes but, when you have SIX 2 year olds that don’t sit still and wanna run around and won’t sit in a stroller, there’s really no other choice. They’re amazing parents!”

On potty training, one fan commented that maybe the Waldrops should give Danielle Busby a call. Meanwhile, other fans complained the kids need a lot more discipline. Overall, though, it seems fans eagerly await the new season of Sweet Home Sextuplets.