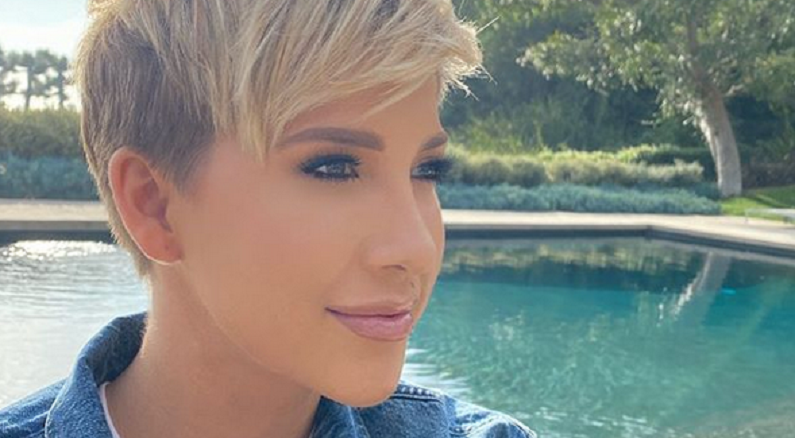 Savannah Chrisley kissed two mystery men after calling off her wedding to fiancé Nic Kerdiles. But it’s not what you think. The men in the new photo are just friends. Savannah shared a new photo that showed her getting kissed by two men. The Instagram photo showed her in the middle of her good friends, Chadd and Brett, as they kissed her cheek.

That’s not all. Her Instagram previously exploded for another reason. The Chrisley Knows Best star also posted a video of herself working out. She received backlash for the lack of face masks and social distancing. However, it could be difficult to work out with a face mask.

As per The Sun, the 22-year-old posted a playful photo with her two male friends. Savannah Chrisley captioned the post: “They kissed a girl and they liked it!” She also included the hashtag “#bestfriends.” In the photo, Savannah wore a zebra print top while Chadd wore a floral print top and Brett wore a gray T-shirt. Chadd shared another photo of the trio posing for the camera.

They kissed a girl and they liked it! 😉😂 @chaddlife @br3ttwayn3 #bestfriends

Instead of kissing, Savannah, Chadd, and Brett gave a look for the camera. Meanwhile, the Growing Up Chrisley star gave duck lips. Chadd captioned the photo: “The three stooges. Chaddie, Sassy, and Bro!” It appears that Chadd and Brett are in a relationship, noting the playful Instagram post with Savannah.

Savannah Chrisley got dragged for this latest photo. This comes after the 22-year-old posted a video of herself exercising with her personal trainer. She received backlash since her 52-year-old father Todd said he was “the sickest I’ve ever been” when he was hospitalized with the coronavirus back in April.

Savannah enjoyed getting up close and personal with her male friends in this latest photo. But her fans weren’t here for it.

“And she still doesn’t answer why she doesn’t wear a mask while working out with her trainer who does wear one,” one follower wrote. “She has no regard for anyone but herself. Period.”

Even Savannah’s bikini photos with fiance Nic Kerdiles had fans screaming “SOCIAL DISTANCING!” As per The Blast, this is the second time that fans slammed the USA Network star. Eventually, Savannah grew tired of the backlash. She defended herself in the comments section.

“We were at a restaurant…at a table,” she wrote. Then she added that her friends in the photo have “been around each other during quarantine.”

She even defended herself for the boxing video she posted. “He actually said it was a health hazard to be wearing one while working out so hard,” Savannah said, referring to face masks. “Please unfollow me if you’re just gonna hate!”

Most of Savannah’s fans agree that others should unfollow if they’re not happy with her content. Health experts advised that face masks should be worn in public unless while working out.

Savannah Chrisley previously spoke to People about her relationship with Nic Kerdiles. After the couple admitted that “things moved way too fast” and postponed their wedding, she shared an update on the latest episode on her Chrisley Confessions podcast. She claims that there are no harsh feelings between them. They just want to slow down and enjoy dating again.

“But when two people love each other and nothing bad has happened, it’s not so clear-cut,” Savannah said. “We’re figuring it out.”

Rumors swirled that the two split since they did not get married in May as originally planned. During the June 17 episode of the Chrisley Confessions podcast, Savannah said they decided to postpone the wedding, long before the coronavirus pandemic.