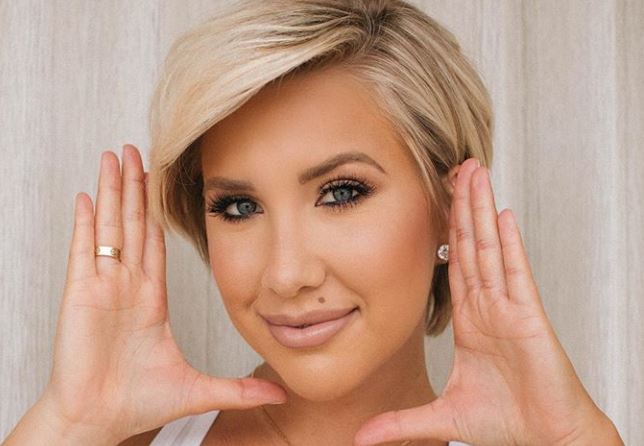 Savannah Chrisley and Nic Kerdiles may have called off their engagement, but that doesn’t mean they can’t date. The couple stopped making wedding plans in June because it was getting to be to much.

“We decided together,”  Savannah told her father, Todd Chrisley, on the June 18 episode of his “Chrisley Confessions” podcast. “We both realized that things moved way too fast and we needed to go back to dating.”

Savannah Chrisley has been making the rounds promoting the new season of Chrisley Knows Best. It seems the main story line this season may be Savannah and Nic’s relationship. Chrisley said, “I think we definitely go into detail about everything and just how unique of a relationship that Nic and I have. Because, we’re not really following the rule book if you want to say, or the playbook.” She continued, “We’re kind of just doing things how we want to do them and what we feel is best for us.”

Because I love this pic and this guy deserves a post of his own! Thank you for being there by my side these past 3 weeks…couldn’t have gotten through the breakdowns or tears without you ❤️ @nickerdiles

Focusing On Each Other

Savannah Chrisley had much to say about her and Nic, “I think right now it’s a lot of focusing on us individually, because I’m a firm believer that if you’re not good to yourself you can’t be good for anyone else.” Savannah said, the hockey player is in a career transition and the two are navigating COVID-19 like the rest of the world. “Right now we’re working on becoming the best versions of ourselves.”

The Growing Up Chrisley star said, “At first we got wrapped up into the whole, you know, ‘Oh, we got engaged.’ Now we have to get married soon. We kind of put pressure on ourselves and we definitely got pressure from everyone else. We just had to finally take a second to step and say, ‘OK, what’s best for us?’ And we just realized that we kind of rushed into things really fast and we still had a lot of learning and growing to do.”

A Wedding In The Couples Future

Savannah Chrisley said the couple may not be wedding planning, but that doesn’t mean they won’t be in the future. According to US Weekly Chrisley thinks right now, with the whole COVID thing, like this is our new normal for quite some time. Because, I believe that everything happens for a reason. God has got a plan and that’s what I’m trusting in. I’m truly leaning into my faith and I believe everything happens for a reason. When that time is right, I will know.”

Savannah Chrisley said about her and Nic, “We’ve had a lot of challenging conversations and we love it. Because it forces us to know better and do better and there’s just a lot of learning going on.”

You can find out what happens in Season 8 of Chrisley Knows Best premiere on Thursday, July 9 on USA Network at 9 p.m. ET.