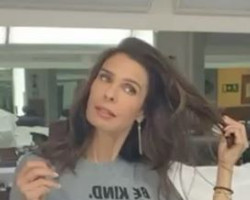 Goodbye, Fancy Face. Days of Our Lives star Kristian Alfonso broke the news that she’s leaving the daytime drama after 37 years. While the show is on production hiatus right now, new episodes taped last year are still airing. However, when the show restarts production, Kristian won’t be one of the stars returning.

A former ice skater, Kristan turned to modeling and then acting after an injury ended her dreams of figure skating. For one of her first roles, she won a spot on NBC’s Days of Our Lives as Hope Williams. She quickly became a fan favorite, moreso when Hope was paired with Bo (Peter Reckell) in a classic 80s supercouple.

Kristian left the show in 1987 for a stint on the nighttime soap Falcon Crest. She briefly returned to DOOL in 1990 to film scenes of Hope ‘dying’ during the epic Cruise of Deception storyline. Held captive in a cage over a vat of acid, Hope ‘died’ in an explosion. Bo eventually moved on to Billie, then-played by RHOBH’s Lisa Rinna.

But wait! Hope wasn’t dead after all. In 1994, Kristian Alfonso came back to DOOL. Bo and Hope eventually reunited several times in the years after that. However, Bo died for real-ish when Peter Reckell quit the show in 2015.

Not Much On-Screen Action Since Hope and Rafe Broke Up

With a supercouple like Bo and Hope, fans have a difficult time accepting the characters in other romances. Most recently, Hope moved on with Rafe (Galen Gerig,) but that romance didn’t last long. Since the couple split on-screen in 2019, Hope hasn’t had much to do.

She was briefly brainwashed into thinking she was Princess Gina. Rumors continue to swirl that Galen Gerig is leaving the soap sometime this summer. Neither the actor or the soap confirm his exit.

DOOL Actress Leaving for Her ‘Next Chapter’

On the other hand, Kristian’s exit from DOOL is for sure. The actress wrote a lengthy statement to Deadline, which also appears on her Instagram page. She writes that she “will not be returning to Days when it resumes production in September.” Furthermore, her final scenes are already finished. She thanks fans for allowing her into their homes for “over three decades.”

Kristian also thanks the crew, whom she calls the “hardest working” in television. She also thanks NBC and the Corday production company. However, her most heartfelt thanks goes to the fans. She ends her missive by saying she “could not have done it” without the fans.

Read her full statement below.

Tell us in the comments if you’ll miss Kristian as Hope Williams Brady, or “Fancy Face,” as Bo calls her.

‘OutDaughtered’ Uncle Dale Finds A New Way To Support The Quints
Josie Bates & Kelton Balka Did WHAT Before They Got Married?
‘Attack On Titan’ Live Action Movie Eng Dub: How & Where To Watch
Comedian Ron Funches Hosts the New discovery+ Series ‘Chopped 420’
This New Duggar Family Video Has Fans Thinking Lauren Is Pregnant