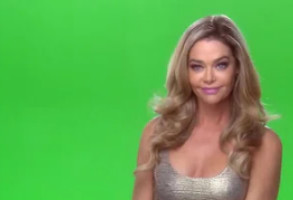 Season 10 of The Real Housewives of Beverly Hills is giving fans a few catchphrases. From Kyle Richards dissing Denise Richards as a “ragamuffin,” to Erika Jayne saying Denise’s husband can “come see about” her. But none are as iconic as Denise’s quip, “I’m f**king Denise Richards.

She’s F**king Denise Richards, and Don’t You Forget It

Things are off to a rocky start between the women on RHOBH. As the premiere episode reveals, Denise stopped filming in December of 2019, which fans will see play out on the show. However, on episode 5, airing May 13, the ladies were arguing over Denise ‘glamming’ it up this season compared to last season.

In a confessional, Denise quips that she’s “f**king Denise Richards,” who has been on more magazines than the other women can count. To Kyle’s face, Denise points out that she often comes to events straight from set. She’s currently working on The Bold & the Beautiful.

Denise apparently likes the line, too. She posted a video to her Instagram on Sunday, July 12th. “Happy Sunday,” the caption says. In the video, Denise appears to be in a business plaza. She turns from behind, tossing her hair. Denise then gives her signature smirk and walks away. After a few steps, she turns toward the camera, smiles and recites the phrase. “I’m f**king Denise Richards.”

Viewers then get an unexpected surprise. A blonde woman standing in a foyer in front of a staircase tosses HER hair while turning around. Surprise! It’s none other than The Real Housewives of Orange County star Shannon Storms Beador. She quips, “And I’m f**king Shannon Storms Beador.” Inquisitr reports that the RHOBH theme music is playing throughout the clip.

Denise cheekily includes the hashtag #Ragamuffin, which Kyle used to describe her earlier this season.

Kyle didn’t comment on Denise’s post. RHOBH stars Dorit Kemsley and Camille Grammer did, however. Dorit responded with an emoji of two hands raised in praise. Camille summed Denise’s video clip up in one word: “Stunning!”

Season 10 has been hard on Denise. Not only is she fighting with most of her co-stars, she will soon be fielding rumors on-screen of an affair with RHOBH alum Brandi Glanville. That begins playing out in Episode 11 on July 22. In next week’s episode, things get awkward when Brandi and Denise both attend Kyle’s party. But first, Denise confronts long-time friend Lisa Rinna for not having her back on RHOBH.

‘Love Island USA’: Flo Wants To Be The Only Girl On Will’s Lips
‘Y&R Spoilers : Who Kidnapped Mariah Copeland And Where Is She?
Did Duggar Cousin Amy King Take ANOTHER Dig At Josh Recently?
Scheana Shay Confirms Engagement, Feels At Peace With Life
‘Sister Wives’ Fans Have A BIG Question For Meri Brown: Too Personal?