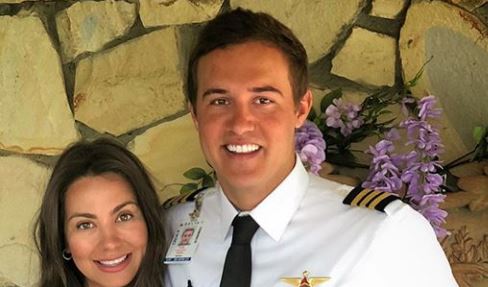 Peter Weber is spending time with Kelley Flanagan and her family in Illinois. Because, Peter sent her home just before he did hometown visits. Flanagan posted to Instagram a picture of her and Peter with her parents and brothers Jim, Tom and Michael Flanagan. Sister, Pamela, and another brother, John, were unable to make the family reunion. She commented, “still missing two of the kids but overall a successful first dinner night!”

“The hometown that should’ve been,” commented Peter Weber. Two months ago the couple made their relationship Instagram official. Flanagan had already met Peter’s family when The Bachelor season was over. Seems the next step was to meet the lawyer’s entire family.

How The Twosome Reconnected

Us Weekly broke the news that Kelley and Peter Weber were fully dating. They didn’t want to announce it to friends and family just yet. This is because it was a new relationship and social media tends to mess things up. In May, the cute couple decided to announce they were dating via TikTok. They used Akon’s “Don’t Matter,” which includes in the lyrics, “Nobody wants to see us together, but it don’t matter, no…’Cause I got you.”

After sharing the TikTok video, Peter Weber shared a picture of him and Flanagan kissing. He posted on his Instagram the next day, writing, “you caught me, let the adventure begin.” Peter also commented on one of her photos on Instagram that “he finally got it right.” A source said they were first hesitant to share their love with the world because of their past.

Learning More About Each Other

Apparently, Kelley’s mom adores her new boyfriend. When Kelley shared how much she loved her Mom in an Instagram post. A follower commented, “I want to know your mum’s opinion of Peter lol,” Flanagan replied, “She loves him!” Peter’s mom is also supportive of the romance, which is a big deal if you watched the finale of The Bachelor.

Despite the uncertainty of the ongoing corona virus health crisis, Peter and Kelley have used the opportunity to learn everything about each other while in quarantine. The pair teased each other about who hogs the sheets in bed, their favorite parts of pop culture and hilarious habits in a series of Instagram Stories.

Peter Weber said, “Kelley’s favorite movie is … nothing! Because she can’t watch movies because she can’t focus on the movies,” He joked in a fake British accent as his cute girlfriend laughed by his side. The couple seem to be very comfortable with each other. However, once things get back to a new normal will distance hurt their relationship?

Stay tuned to find out more about Peter and Kelley’s relationship. You can watch The Bachelor on ABC when it returns in the fall.