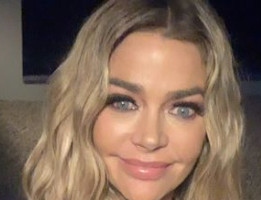 The Real Housewives of Beverly Hills star Denise Richards is getting it from all sides. While currently feuding with her co-stars, she is also fighting her ex for child support. Rumors of an alleged affair with Brandi Glanville may not look good in her upcoming court case. Could that be why Denise keeps refusing to discuss certain topics during filming?

In the early 2000s, Denise had a whirlwind romance with actor Charlie Sheen. The former couple were wed from 2002 until 2006. During that time, they had two daughters, Sam, 16 and Lola. Denise recently celebrated Lola’s 15th birthday with a series of sweet throwback photos. Scroll through them below.

This beauty turned 15 on June 1…. 💕 lola I’m so proud of the sweet, compassionate, funny, strong, girl you’ve become. My social 🦋… always a ray of sunshine ☀️ & Always so happy & positive no matter what the circumstances are. I love that about you. I’m proud to be your mom & I love you so much. Happy Birthday lola 🌈🎂

Denise and Charlie’s post-marriage relationship has been rocky at times. However, she never talks bad about her ex on RHOBH or to her daughters. In fact, she bristled earlier this season when the other ladies tried to advise her to seek a lawyer’s help in fighting Charlie’s recent legal maneuvers.

Child Support Battle Heats Up in Court Next Month

The exes will face off in court next month over the missed payments. Denise’s RHOBH co-star, Teddi Mellencamp, seemingly stirred the pot in the Season 10 premiere. She told Denise, on camera, about an interview Charlie gave where he called Denise a “coward,” among other things.

It was after that that Erika Jayne and the others tried to convince Denise to get a lawyer. She demurred, saying she would when she got home. However, in the next scenes, she explains to her current husband, Aaron Phypers, what is going on. She also revealed her plans to skip the earlier court date.

Whether rescheduled or a new legal filing, Charlie and Denise are expected in court next month.

Season 10 of RHOBH Focuses on Denise

This is Denise’s second season with the Bravo show. Her first season was a breeze compared to Season 10. Viewers are watching as the other ladies are ganging up on Denise over her alleged “mom-shaming.” For Denise, the conversation is done, but the other women will not let it go.

As a result, Denise has been leaving dinners and other events early instead of addressing the issues with her co-stars. And the season is only half over.

Earlier this year, RHOBH alum Brandi Glanville spread a rumor that she had an affair with the very-married Denise. The alleged affair is coming up on the show, possibly starting next week. The preview at BravoTV shows Brandi attending the same party as Denise.

Don’t miss an all-new The Real Housewives of Beverly Hills on Wednesday, July 15 on Bravo. Check back with us for updates on Denise’s upcoming court date.

Does Parker Kate Busby Suffer From A Pediatric Disorder?
Fans React to ‘Mom’ Series Finale
‘Below Deck Sailing Yacht’ Jean-Luc’s Mom Calls Out Dani
‘Days Of Our Lives’ Week Of May 17 Spoilers: Abby Says Farewell – Ciara Reaches For Ben
The Bold and the Beautiful Spoilers, May 17-21: Liam Starts To Lose It