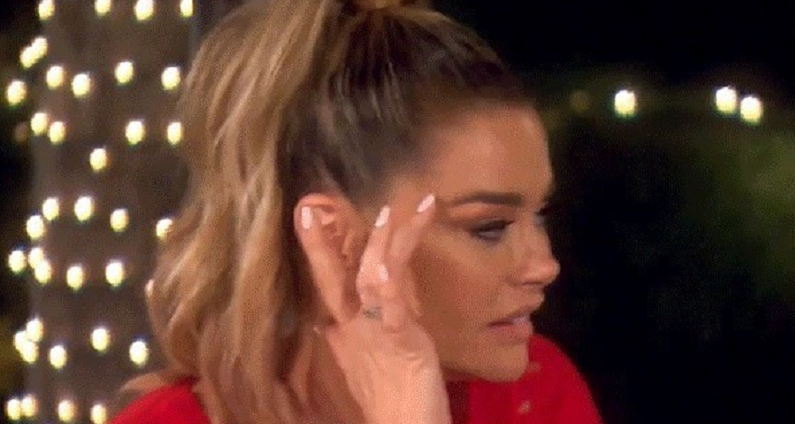 Denise Richards shook up the housewives. On Wednesday night’s episode of The Real Housewives of Beverly Hills, she abruptly left Kyle Richards’ BBQ party with her husband Aaron Phypers. It all started when Denise told Lisa that they were going to a strip club. Then Lisa ran off and told Dorit Kemsley, Erika Jayne, Garcelle Beauvais, Sutton Stracke, and Teddie Mellencamp.

The ladies found that tidbit interesting. This comes after the drama at Denise’s BBQ party. She didn’t like it when her RHOBH costars brought up the topic of threesomes around her children. Her costars haven’t stopped talking about since. Now, Denise is denying that she went for strippers and steak with Aaron.

Denise Richards claims she was “joking” about having steak and strippers

As per Us Weekly, The Real Housewives of Beverly Hills star defended herself. After the Wednesday, July 8 episode aired, Denise took to Twitter to clarify her comments.

“I was obviously joking about the steak & strip bar,” she tweeted. “I said it in my confessional but never made it in the episode #rhobh.”

In her tweet, she also included the silly face emoji with the winking face and tongue sticking out. Denise was clearly upset that her joke was edited out. Even Andy Cohen agreed with her.

On Twitter, Lisa Rinna couldn’t stop joking about Denise and Aaron’s decision to go for a steak at a strip club. Meanwhile, RHOBH fans slammed the reality star.

Lisa Rinna couldn’t stop making fun of Denise Richards. She had too much fun at the Bold and the Beautiful star’s expense.

“Panties out, shoes off and some gravel doesn’t stop me from finding out what’s wrong with my friend!!! #RHOBH” Lisa tweeted.

She then followed up with the tweet, “Who knew a strip bar was a good place to get a [steak emoji] at?? #RHOBH”

Fans weren’t happy over Lisa’s comments about Denise. Many of them took to her Twitter account to slam the star, as per The Blast.

RUNNING to my TV to catch #RHOBH returning tonight on @bravotv 9pm 💎 @jackiecoxnyc ALL NEW!!!!!!!

“Amazing how fast Rinna had to run back to give that information to the girls,” one fan wrote. “She is no one’s friend.”

“Of course you were! I can’t believe a friend for so many years talk behind your back and tries to stir the pot!” added another viewer.

Denise previously revealed her disappointment in her “friend of 20 years” before. RHOBH fans watched Lisa running into the driveway in her green dress to catch up with her friend before she left the barbeque. But after Denise left, Lisa looked gleeful as she ran back to the rest of the women to talk about her. It makes sense as to why fans would be upset.