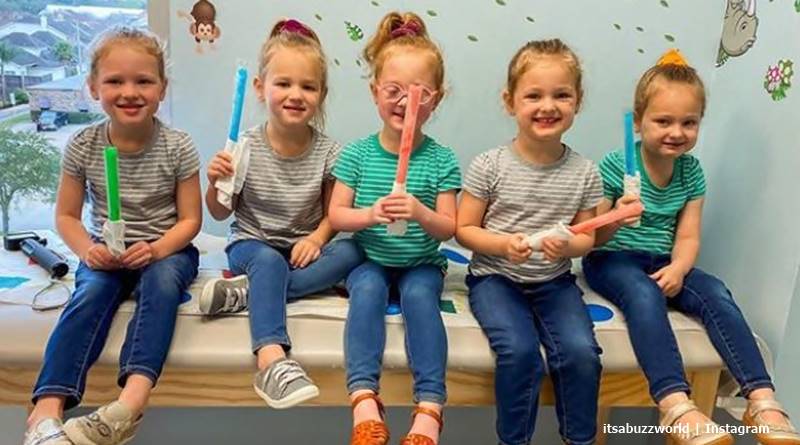 OutDaughtered dad Adam Busby shared a post on Instagram that strongly hinted they film for a new season of the show. Plus, he confirmed they filmed more episodes, so it looks like a continuation of the season that just ended. The last season got cut short because of the coronavirus, so fans only saw four episodes.

We reported that the picture Adam shared of Lulu the quint standing in front of a cameraman strongly hinted at a new season. However, he also confirmed they shot some film and it seems that Season 7 possibly just took a hiatus. In a recent Instagram post, he said that they are filming more because fans loved the last season so much. Recall, the family filmed their own last episode as the production left during the quarantine. Fans enjoyed it so much, they clamor for more.

InTouch Weekly noted that Adam spoke more about shooting some footage. He shared on his Instagram stories about it. Adam said that everyone felt bad the show ended so soon. But enthusiastic “feedback” encouraged them and they work on filming more now. One reason the filming stopped seemed that they worried about backlash and issues surrounding COVID-19.  But, whatever happened, fans now look forward to more episodes. Hopefully, very soon.

One OutDaughtered fan suggested on Adam’s post about Lulu, “I thought the episode that you filmed was amazing. Would that be an option?” Well, it certainly looks like they consider that option. Possibly, they also use the production crew for some of it. Presumably, they follow COVID-19 guidelines if that happens. But really, fans don’t care how they do it. They just wait impatiently for more of the quints and Blayke. Actually, fans also love seeing Uncle Dale and the other extended family.

Notably, the last season brought way less toxicity between Adam and Danielle Busby. Fans and critics began comparing them to Jon and Kate Gosselin of Jon and Kate Plus 8. Adam hated the editing, so the family took a break. That meant a delay, so when the new season arrived, people flocked to watch it. But, cut short after just four episodes, many OutDaughtered fans felt deprived of their “happy” fix. TLC often edits people to look like villains. But really, the quints bring so much quality to the show, they never needed to make Adam look like a big bad man. Less domestic drama, more quints, the fans demanded. And, they got it.

Hopefully, fans need not wait too long before more episodes arrive on TLC. Naturally, as the coronavirus waxes and wanes, no timelines and dates come out just yet. But, when they do air more of OutDaughtered, plenty of fans will tune in and watch.

Janelle Brown Encourages Fans To Change: ‘Do Something Different’
Mady Gosselin Reveals Disturbing News About Family Drama
‘RHOBH’ Queen Bee Kyle Richards Runs From Hive Of Bees (VIDEO)
‘LPBW’ Jackson Roloff Has What It Takes For His Own Show?
Meri Brown Wishes Daughter Mariah Happy Birthday, How Old Is She?