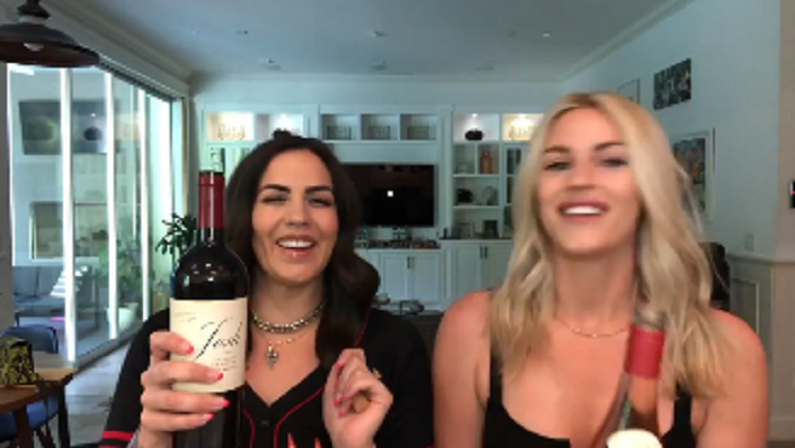 Vanderpump Rules star Katie Maloney-Schwartz has grown closer to Dayna Kathan. As fans know, Dayna was one of the many newbies on Season 8 of the Bravo series. Some of the newbies had a hard time fitting in with the rest of the cast. Even viewers didn’t warm up to them.

But Katie has befriended the co-star. She recently hung out with Dayna, according to a new report. The two ladies teamed up for a new special called “Wine to Me,” which Dayna announced on social media. Read on to learn more about Katie and Dayna’s new venture.

Vanderpump Rules co-stars hang out together

Katie Maloney-Schwartz was spotted with Dayna Kathan. This comes after the explosive Vanderpump Rules firings. Bravo axed Stassi Schroeder and Kristen Doute for their past racist actions and comments. As a result, the trio lost their “Witches of WeHo” wine line. Meanwhile, Katie has grown closer to Dayna, who made her debut in Season 8.

On Monday, July 6, the duo filmed their first-ever online event, as per Inquisitr. Dayna posted a photo on her Twitter account. She revealed that their “Wine to Me” special would debut on Wednesday, July 8. She also hosted an Instagram Live chat with Katie. One fan asked them how their first show went.

“It was really good,” Katie Maloney-Schwartz responded. “I think we gave really good advice. I think it was eye-opening and insightful [and] I think everyone is going to really take away a lot.”

Dayna revealed that she and Katie are “so excited” about their joint venture. Katie also said that she “can’t wait” for their followers to see what they’ve been working on. In the clip, the VPR co-stars filmed at the home that Katie shares with her husband, Tom Schwartz. The women enjoyed a glass of wine as they filmed for Dayna’s Instagram followers.

As Vanderpump Rules fans know, Katie Maloney-Schwartz will film Season 9 without Stassi or Kristen by her side. So, she’ll have to warm up to the rest of the cast. Fans are loving seeing Katie and Dayna hang out together. On Season 8, the newbies didn’t seem to have a connection to the OGs of the show.

However, Dayna mixed well with the group. She became friends with some of the original cast members, including Kristen Doute and Ariana Madix. When Kristen appeared on Heather McDonald’s Juicy Scoop podcast, she had nothing but good things to say about Dayna. She said that she was “really close” to the SUR waitress.

Katie Maloney-Schwartz returned to social media. She shared her first selfie since the Bravo firing scandal. The 33-year-old reality star took to her Instagram Stories to reveal that she’s been focused on self-care, as per The Blast. She smiled brightly under a light shield while pampering herself. In the caption, Katie explained to her followers that she’s been changing up her skincare routine.

Vibe check. What day is it?

“Trying out the @dmhaesthetics light shield,” Katie wrote in the post. “I have been using the @drdennisgross light mask for a year now and I just LOVE light therapy.”

It’s the first photo that Katie posted on social media since her best friends got the boot.

What are your thoughts on Katie Maloney-Schwartz and Dayna Kathan becoming friends? Sound off below in the comments section.