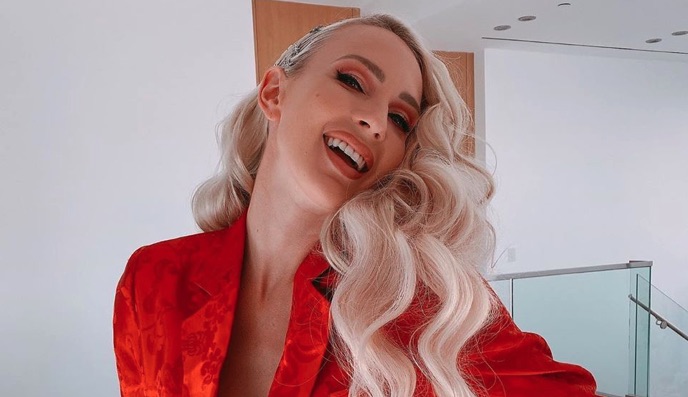 Back in December 2019, Selling Sunset star Christine Quinn married Christian Richard. She was super sick and missed out on some traditional events leading up to her marriage to the millionaire businessman. Turns out, she had Covid-19. What has the Netflix star revealed in a new interview?

Selling Sunset fans are waiting for Season 3 to drop on August 7. One of the big highlights is Christine Quinn is getting married to Christian Richard. Yet, on Sunday, July 5, on Goss.ie’s Gosschats, the mercurial realtor shared that this was both the “high point” and “low point” of her life.

How could marrying a millionaire businessman in a winter wonderland, with around 75 of their family members and close personal friends be anything but spectacular? Well, if you have the coronavirus, it can certainly damper any sort of sumptuous extravaganza. Christine’s wedding was marred by Covid-19. But, she did not know she had it til much later.

She shared that “I was really, really sick on my wedding day. I actually had what I now know is corona.” The 31-year-old further explained that she was quite sick in late December. This lasted “about a month.” She had been traveling a lot, and the Netflix cameras were on her, filming Selling Sunset.

So, when it came to some of the normal pre-wedding activities, like a bachelorette party, she could not do it. Christine Quinn was too sick.

On this week's episode of #GossChats @itsalirose is sitting down with #SellingSunset star @thechristinequinn who opens up about all the drama that goes on behind the scenes of the hit Netflix show, and reveals for the first time that she was battling coronavrius on her wedding day. #GossChats is sponsored by @haus_of_jejuve

When Netflix drops Selling Sunset Season 3, on August 7, fans will get to binge watch drama overload. Quinn wore a black wedding gown designed by Galia Lahav. Christine Quinn has always dreamed of wearing a black wedding dress. Along with her winter theme, it should make for a visually dramatic wedding.

Besides the lead up to Christine Quinn’s winter wonderland wedding, there was some drama that Quinn was not a part of. She shared she “wasn’t privy to it,” but she heard and “sort of saw” some major stuff going on. So, she will be watching along with the rest of us, as Christine believes this will be “interesting to see.”

She also promises “drama in every scene.” Selling Sunset fans are counting on a lot of drama from Chrishell Stause. While Christine gets married, Chrishell’s marriage ends.

Selling Sunset Season 3 will have a very interesting juxtaposition. On one hand, fans will get to see Christine Quinn’s extravagant wedding. On the other hand, fans should finally get the scoop on why Justin Hartley and Chrishell Stause’s marriage exploded. Chrishell married the This Is Us star in 2017, and in November, he “blindsided” her by filing for divorce. The previews have shown tears and Chrishell wondering what she was going to do next now that she lost her best friend.

Of course, there will also be some real estate, and this season, that should be spectacular. There is a $40 million dollar new-build home that all of the agents want to sell.