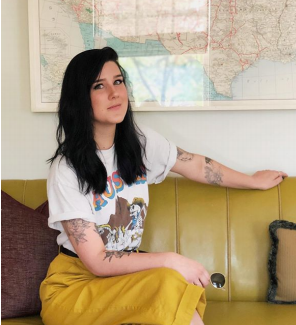 The animated show RWBY voice actress, Arryn Zech, is setting the record straight. Zech made statements during a stream on Twitch that set off a chain reaction with her fans and fans of an ex-boyfriend, The 100 actor Bob Morley. She said this shockwave through The 100 fandom, “creat[ed] a lot of false or distorted information,” so she took to her Twitter platform to correct these errors.

Zech didn’t hold back and started her tweet stating, “Bob emotionally and verbally abused me.”

Zech said she, “couldn’t count how often I was yelled at,” and, “I was berated for […] sharing a poem […] for sleeping in too much.” Zech describes multiple incidents throughout their relationship where she felt scared and attacked. The abuse mentioned was not just from Morley, but also from his fans. Zech claims Morley threatened to break up with her when she tried to address the situation. She goes on to insinuate that Morley allowed her to take the brunt of the abuse from fans.

“All the things I was being blamed for by his fans, all the horrible rumors, the name-calling, the harassment, he saw it, let it happen, and let it continue.”

“I thought that was going to be my life for forever and I’d just had to come to terms with that reality.”

Zech continued saying, “despite all these things, I still wanted to be there for him, take care of him and protect him.” Despite her desire to keep the relationship, Zech said, “he [Morley] cheated and ended it with me, just as he’d cheated and ended it with his girlfriend before me, with the same girl, no less.” Zech never explicitly states who the girl was Morley allegedly cheated with. But in her post, Zech heavily implies the culprit is Morley’s now-wife and co-star Eliza Taylor.

Recently I married my best friend and soul mate @WildpipM We are very happy and ask that you keep your comments kind and respect our privacy at this time ❤️ pic.twitter.com/MDItwk0SLM

“They had been having an affair for at least 6 months prior to our breaking up.” Zech describes how Morley had denied the relationship. She said, “the gaslighting by these two made me feel crazy.” Arryn claims she caught Morley cheating in their home because he forgot to turn off the cameras.

Zech and Morley met at Supanova in 2015, and they began dating later that year. The couple was together until Valentine’s Day 2019 when Morley reportedly ended the relationship. Zech wrote, “In December 2018, I had secured a rental house in the hills for us, […]. On Valentine’s day 2019 he broke up with me and said he wanted the house because he ‘deserved it.’”

Morley married his The 100 co-star Eliza Taylor on June 7, 2019. The marriage was a huge surprise to fans. Almost no one knew the two were even dating.

Zech stated, “Now I know he had me get that house and move all our things for their future. He had no intention of living there with me.”

Zech said she had been in therapy for a year and a half, and she reconnected with the important people in her life. Because of this she now has the courage to admit to the alleged abuse. Zech tells her truth.