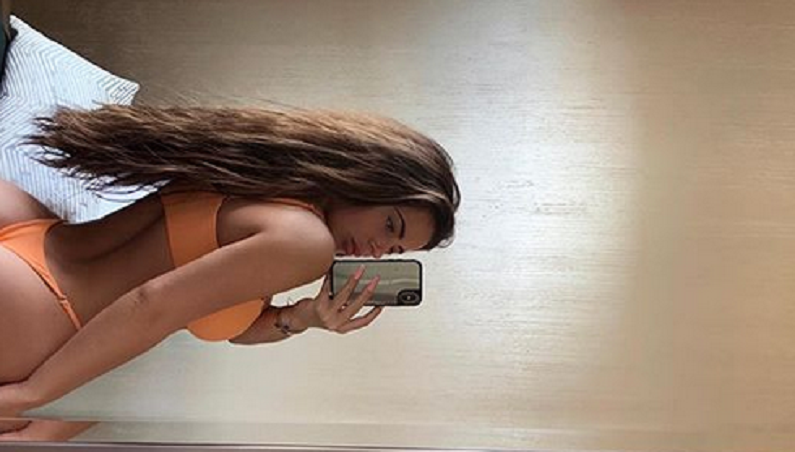 Brielle Biermann showed off her assets in sizzling bikinis. She quit social distancing to spend the day at the beach with her friends. It was also the perfect time for Brielle to promote her mom’s swimsuit line. The 23-year-old reality star modeled several bikinis during her beach trip.

Back in March, Kim Zolciak-Biermann launched her swimsuit line. She declared that she was the proud owner of “more than 1,000 bikinis.” The reality star and mom of six has also been spending her time posing in bikinis. So, it makes sense that she would release a line of her own. And now Brielle is enjoying some of her mom’s swimsuits.

As per Yahoo! Entertainment, Brielle Biermann put her assets on display. She wore the Seasalt Top and Bottoms (which cost $90 each) from Kim Zolciak-Biermann’s sustainable swimwear line Salty K. She also made sure that she showed it off on Instagram. The revealing bikini put her assets on display. In some of the shots, Brielle poses on her hands and knees. As her friend took her photo, another shot her from a different angle and zoomed in on her bottom in a clip posted to her Instagram Stories.

The Don’t Be Tardy star captioned the video, “We’ll do anything for the best shot!” Another video shows Brielle straddling the water with her back turned the camera. Then she seductively looked over her shoulder. Brielle has been promoting her mom’s swimsuit line before its launch.

Last month, she posted photos from the family’s backyard barbeque. In one of the close-up photos, Brielle wrote in the caption, “POV the bartender bringing me my drink poolside.” Kim’s daughter proudly wore a pastel pink bikini with a matching bucket hat.

Get the details on Kim’s new swimsuit line

Brielle Biermann is very supportive of her mom’s new venture. During the launch of Salty K, Kim told People that she always wanted a swimwear line of her own. She had so many design ideas in her head, it was hard to get them out.

“I know how I want suits to look and fit,” Kim explained. “I have visions and sketches. I think people know that if I’m going to do something, I’m going to do it 100 percent, that’s it.”

On her 42nd birthday, Kim officially announced her new swimsuit line. In her interview with People, she revealed that the first five swimsuits would launch on June 1. The rest of the swimsuits were made available for purchase by July.

Also, Instagram verified the Salty K account, and Kim’s fans are looking forward to investing in some of the designs, with bikinis costing $180 for a top and bottom. Kim is a successful entrepreneur with a cosmetics and skincare line.

Some of those business ventures include KAB Cosmetics and Kashmere Kollections. But her swimsuit line is the first one she has control of with her husband Kroy Biermann as her business partner. It remains a family business with Brielle Biermann as her spokesmodel.