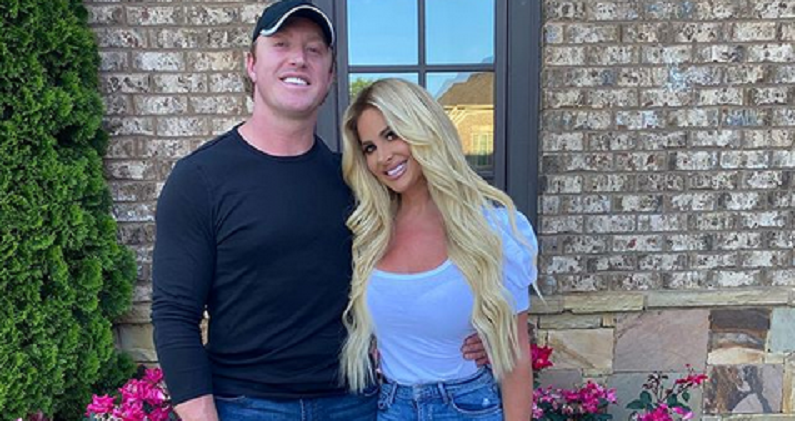 Kim Zolciak-Biermann is currently promoting her new swimsuit line. She previously took to social media to post a photo of herself wearing a tiny bikini. She had many of her followers shocked over her incredible body. But there were some haters.

Online trolls accused her of using Photoshop in her latest swimsuit photo. The Don’t Be Tardy star’s curves were previously on display in a bikini. The tiny number comes from her Salty K swimwear line. Kim’s followers were flabbergasted over her body. But not everyone was impressed with her latest bikini photo.

Kim Zolciak-Biermann has no time for haters. On Wednesday, June 3, she took to Instagram to post a photo of herself in a white one-piece swimsuit from her luxury swimwear line. The post was filled with NSFW comments about her body, per The Blast. However, there was one Instagram user who accused her of Photoshopping her photo.

In the photo, the 42-year-old reality star showed off her signature blonde hair and curves in the $180 one-piece swimsuit from her swimwear collection, Salty K. “Everything but the kitchen sink @saltykim,” Kim captioned the post. Most of her followers remarked that her curves weren’t for real.

“Sweetie the Photoshopping is out of control,” one follower wrote. Kim retaliated, “Hey sweetie watch my story to calm your nerves.”

Another follower agreed with the first user, writing, “Yessss one leg is bigger than the other.”

“Sure is because the pic was taken close and one leg is back,” Kim simply responded.

The Bravo personality shared a clip on her Instagram Story that shows her wearing the same white swimsuit. It also proved that her body looks the same as her Instagram photo.

“Told you guys it holds everything in,” Kim said while jumping up and down in the swimsuit.

“Wasn’t kidding! Double lined thick Italian luxury fabric. Not transparent when wet,” she wrote in the text overlay of the Instagram Story.

But not all of her comments were bad. Most of Kim’s followers defended her bikini body. Others were stunned over the fact that she got her body back after having six children.

The Real Housewives of Atlanta alum launched her swimwear line on Monday, June 1. It includes Brazilian-style swimsuits, high-waisted options, and stylish one-pieces, such as the one that Kim wore in her latest photo. She’s been showing off some of her designs on Instagram.

Even Kim’s daughter, Brielle, has posed in some of her mom’s swimwear, per Us Weekly. Her 23-year-old daughter has been actively promoting her mom’s swimwear line on her respective Instagram account. Last month, Brielle posted an Instagram photo that put her derriere on display. In the photo, the reality star wore a mint-colored, floral print bikini. Brielle revealed that she was having a “pool day” at home in Salt K swimwear.

Kim Zolciak-Biermann was previously slammed for promoting her swimwear line at the time of George Floyd’s death. What are your thoughts? Do you think it’s insensitive for Kim to promote her new merchandise in lieu of recent events? Sound off below in the comments section.