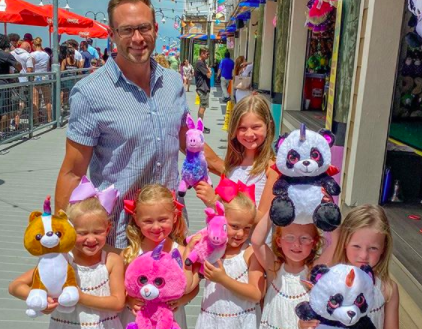 OutDaughtered‘s Adam and Danielle not originally from Texas

Despite starting their family in the Lone Star State, OutDaughtered stars Danielle and Adam are not originally from there. The pair actually grew up and met in Lake Charles, Louisiana. They first met while both working at Target.

After dating for two and a half years, Adam proposed to Danielle on Christmas Eve. They got married and then moved to Texas to begin their family. Then of course Adam and Danielle welcomed their first daughter Blayke in April 2011, followed by the next five in April 2015.

Earlier this month the Busby family actually spent a week away in Louisana with Adam’s family to celebrate his birthday. This birthday gathering actually provoked a negative response from several fans who were concerned about the family not following social distancing guidelines.

Unfortunately, in the last few years, the OutDaughtered family has faced numerous issues with their home. According to InTouch, the family shared that they were forced to temporarily move out due to dealing with some house “issues” in a vlog from 2018.

Additionally, an episode of OutDaughtered from last June covered Adam and Danielle discovering mold. It, unfortunately, took their daughter Ava getting sick for the family to learn what their walls were concealing. The mold seemed to be covering the whole upstairs of their family home! They moved out of the “sick” house into a different one.

Now, as of this June 2020, renovations FINALLY began around the Busby house. Recently, Danielle took fans on a small tour through their construction zone/house. She showed off her kitchen, which is still under a lot of construction as well as the new mudroom. Danielle said, “OK, kitchen remodel is still underway, and it’s a hot mess still in this kitchen, but look at my island! Look at the detail! So stinking cute.”

She went on to gush about the mudroom, which included six new cubbies for all of the girls to place their backpacks and shoes each day. Even Adam got in on the excitement showing off more of the construction in addition to new landscaping in the backyard the next day on his social media.

What do you think of the home-owning stresses the OutDaughtered family has been facing? Let us know what you think in the comments below. Be sure to watch new episodes of OutDaughtered on TLC Tuesdays at 9 p.m. ET.