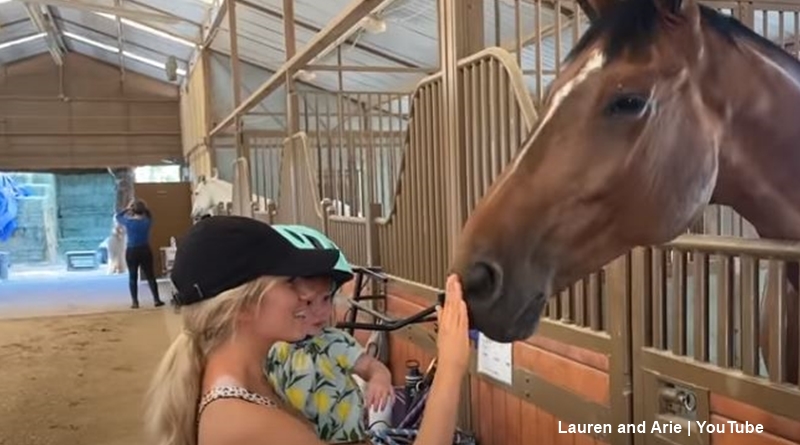 Bachelor alum, Arie Luyendyk Jr. went bike riding with Alessi and Lauren Burnham on Father’s Day. It certainly looks like his present to himself involves a horse for Alessi or his wife. He posted up a nice video on YouTube on June 26. Alessi met the horses and fell in love with them. And, as he said later on Instagram, it looks like he’s “in trouble.”

Lauren and Arie posted up a Father’s Day video on YouTube. They recently moved house, and Arie showed fans around the place. A lot of the furniture’s already in the new home. And, Lauren won’t let him forget they chose the place because it’s ideal for keeping horses. Up bright and early with “the sun,” Lauren and Arie grabbed some coffee and after a quick guided tour through the open-plan living area, settled down by the pool to drink it. As Arie said, “it’s a beautiful place.”

On the cards for the Bachelor alum’s Father’s Day, Lauren planned a bike ride. After one-year-old Alessi woke up, they went off on their bikes. They came across and came across some nearby stables. There, they stopped in for a look and Alessi met her first horse. At first, she looked a bit unsure, but later, she touched the horse on his soft nose. Lauren said to Arie, “I think you’re in trouble, you might lose this one.” Arie’s probably gonna lose for sure. Two women in his life like horses. But, he seemed rather keen on them as well.

Over on Instagram, Arie shared a photo from their day at the stables. It very beautifully captured that moment Alessi met her first horse. It looks like this Father’s Day, a horse looms in his future. Arie captioned it with, “I have to say I think I’m in trouble 😂.” Fans loved the cute photo and many people commented on it. One fan wrote, “Alessi is showing great taste in the breed of horse! Daddy should buy her several Arabians. 😊💜 .”

Another Bachelor fan joked, “You’re not getting your garage anymore, you have to keep the barn for Alessi’s horses! 😂” Horse-lovers agree, “Y’all need a pony!!!! 🐴 Horses are the best things of life!” One other fan wrote, “You guys really need to get a horse sorry I had to say that 😂❤️.” It certainly seems that if Arie held any strong objections, he’s about to lose the argument. But really, in the video on YouTube, it seems he probably loves them as much s the two girls in his life.

Alessi’s first time seeing a horse and I have to say I think I’m in trouble 😂 New YouTube video up, check it out!

What do you think about Alessi and Laurie getting dad Arie to look at horses on Father’s Day? Do you agree he should just get that wallet out and give in? Sound off in the comments below.