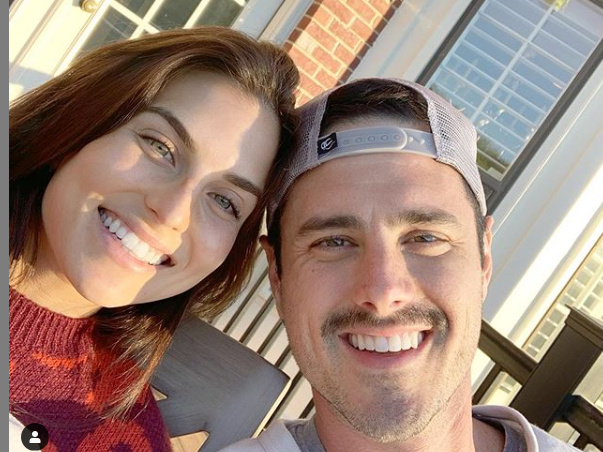 The season of The Bachelor starring Ben Higgins is re-airing next week. Both Ben and his fiance, Jess Clarke are not going to watch it. As part of The Bachelor: The Greatest Seasons Ever! The network has been replaying older seasons. Already we’ve relived greats like Kaitlyn Bristowe and Sean Lowe. Ben Higgins is an actor who in addition to being The Bachelor in 2017 was also on The Bachelor Winter Games.

He said, he doesn’t have any issues with it, he lived it, but he supports her not wanting to watch it. Higgins said, “it’s not hard for me to watch back because I know what to expect. But Jess will not be watching it, she doesn’t have a desire to watch it.” Higgins sweetly said all the things that happened to him led to meeting his fiancé.

How quickly plans can change. Personally I am sorry for all of you who have been affected by the shut down and have had to cancel or postpone your weddings after months and months of planning. This is why I am so proud to be partnering with @jaredthegalleriaofjewelry on the #lovecantwait campaign. Jared and I understand the importance of celebrating your special day. This is why Jared built a platform to allow you to have your wedding ceremony virtually. Head to jared.com/virtualwedding to learn more and enter for a chance to win a virtual ceremony officiated by me! #jaredpartner NoPurNec. Ends 6/22 18+ & registered to be married via Virtual Wedding w/ Jared in July 2020. Rules link in bio

Ben Higgins said, “she is my partner, and I want her to know that, I don’t want her to feel any sort of heartbreak or sadness from that.” He said while she won’t watch the show, she will appear on it. His fiancée let him know that wasn’t a journey she wanted to go on according to US Weekly. When Ben proposed Jess posted, “I don’t remember everything you said, but I know that I said yes. I woke up in a dream today and I get to live in this dream every day from now on.”

He doesn’t think she’ll be able to avoid everything about it. Ben said, “she’s going to get through that day, and probably the week afterward, with all the comments about my season, and then we’ll move on. He doesn’t think it would be healthy for her to watch it.

He Doesn’t Regret Anything That Happened On His Season

Ben Higgins said, “it changed my life forever, and in the best ways, for the most part. And it’s expanded my life in ways I never could have imagined.” He said there is going to be a little bit on nostalgia, but he doesn’t regret anything. He said, “it was all on my way to Jess. I believe everything led me to this point in my life.”

Ben Higgins will work with Jared to help couples get married during this time of lock-down. A lot of weddings were postponed or changed due to the pandemic. Jared is going to help thousands of couples with their virtual wedding. He said, “the couple can send in their story and three will be chosen.” Their weddings will be officiated virtually by Ben. He became an officiate while competing on one of his Bachelor dates. Fans can watch Ben Higgins’s season on June 22nd on ABC.

Whitney Way Thore Still Gets Kisses After Buddy Moved On
‘Love After Lockup:’ Lacey Shares First Picture of Baby
Why Are ‘1000-Lb Sisters’ Fans Lashing Out at Tammy Slaton?
‘Life After Lockup’: Is Sarah Still In Love With Michael?
Caryn Chandler Reveals Whether Amy Roloff Will Be At Her Wedding