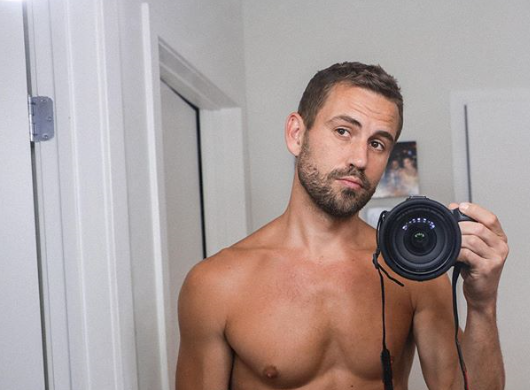 Nick Viall had to relive that time he proposed to Kaitlyn Bristowe and she said no. The former Bachelor posted a picture of himself without a shirt on. He captioned it, “because I get dumped AGAIN on National TV tonight.” During The Bachelor: The Greatest Seasons – EVER! his proposal was featured. The franchise has been walking down memory lane by revisiting some of the best seasons on Monday nights. It’s to give those chomping at the bit for more shows something to hold them over.

The picture he posted to make himself feel better got an unexpected response. As most Bachelor Nation stars know, anytime you put yourself out there, you’re open to criticism. These comments moved Nick to come back with a new picture and a long caption about his feelings. The first picture shown below was a mirror selfie after a workout. The angle did make Viall look incredibly skinny and toned.

Nick Viall Felt Self-Conscious After Comments On His Picture

Nick Viall came back to comments on his picture he wasn’t expecting. One said, “you need a burger.” Another said, “please gain weight.” The star responded to hundreds of comments on his Instagram. He said, “dear internet. I never thought you would make me self-conscious about my body. Yet I woke up to hundreds of comments on my last post about my weight, eating habits, and mental health all from posting a post workout pic where I looked particularly lean.”

Viall went on to say, he had never lacked confidence about his body. According to People  he said, “if the internet can get to me, it can get to anyone.” He posted a new picture showing his body from a different angle. In the new picture shown below, he does look more filled out while still fit. “He said, “the next time you want to criticize someone based on a bad angle, just be careful.” “A picture doesn’t tell the whole story”, he continued. “You could be stripping down months of work.”

He Warned People To Be Careful Criticizing Others

Nick Viall told followers he thought the comments wouldn’t bother him. He said, “be-careful with your words before you give your feedback on peoples physical, emotional, or mental health.” Nick said he’s been running four miles daily and feels like he’s in good shape. He also shared he eats Snickers ice cream bars and bacon every day.

Nick said he didn’t even want to admit the comments made him feel self-conscious. After these comments, he added, he’ll be okay. He said, “I’m still pretty sure I look fantastic naked.” No doubt, fans will still see shirtless pictures of Nick on social media.