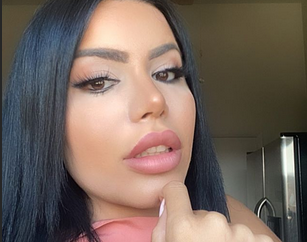 90 Day Fiance stars Larissa Dos Santos Lima and Colt Johnson got a divorce in early 2019 after being married for under a year. Larissa was arrested for domestic battery against Colt in January 2019. After this incident, he filed for divorce. Now, a year after their divorce, Colt has a new lover, Jess Caroline. Larissa talked about this new relationship in an interview with ET.

Is Larissa over Colt?

90 Day Fiance star Larissa told ET that she hasn’t talked to Colt since October 2019. Larissa thinks that she and Colt could get along well if they began talking again. She also mentioned that Colt hasn’t given her the closure that she wants. However, Larissa worries that if she reaches out to him, the media will make things seem more dramatic than they really are.

Larissa said that she’s excited to do what she wants and start dating again. However, there are things she misses about Colt. On a recent episode of 90 Day Fiance, she admitted that she misses the attention Colt gave her. She also told ET, “When we were good, we were amazing.” Larissa said she is “sad” to see Colt with a new girlfriend, but she wants him and Jess to be happy.

When asked if she would ever get back together with Colt, Larissa said that she isn’t romantically interested in him anymore. “But,” she added, “Never say never.” While she doesn’t see them as a couple anymore, she thinks that they could repair their friendship.

Larissa doesn’t seem to like Colt’s new girlfriend, Jess, very much. In her interview ET, she said, “I think Jessica is too much for him. Like, she’s too fast for him.” Larissa believes that Jess is bringing out a wild side in the “conservative” Colt she knew.

A sneak peek of 90 Day Fiance: Happily Ever After? Season 5 reveals Larissa and Jess meeting up. Larissa explained that she expected this meeting to help her finalize her breakup. While she didn’t say whether she got what she wanted out of her get-together with Jess, she did admit that she doesn’t know if it was good for either of the women.

Larissa admits that she and her new boyfriend, Eric Nichols, are on and off. She told ET, “Eric and I are very complicated because we have kind of the same personalities.” She even revealed that she and Eric had an “explosive fight” in 90 Day Fiance Season 5. But, this doesn’t hold Larissa back. She says that she likes Eric more than Colt. She describes her new man as a “hottie.”

Do you think Larissa should get closure from Colt so she can move on? Let us know in the comments and check TV Shows Ace for more updates.