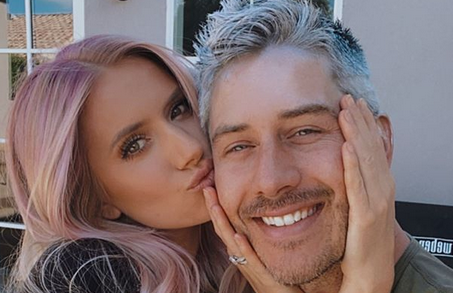 On June 15, former Bachelor star Lauren Burnham posted a video on her Instagram story to tell fans why she’s so willing to talk about her miscarriage. Lauren and her husband, Arie Luyendyk, had a miscarriage in May. The couple was so excited to add another little one to their family. While they are saddened by what happened, they’ve decided to not let their feelings keep them from talking about the miscarriage.

On her Instagram story on June 15, Lauren says that she wishes people were more willing to discuss their miscarriages. She points out that it is a common issue but parents don’t usually talk openly about it. She hopes that by sharing her and Arie’s story, more people will feel more comfortable telling others about their miscarriages.

Lauren continues her Instagram story by thanking a stranger for paying for her family’s lunch at Flower Child. She says, “There are really nice people out there. I’m really, really appreciative.” The Bachelor alum is grateful that there are people willing to help others during this stressful time.

Lauren then had to stop the video because Alessi began to fuss. However, the video shortly resumed and Alessi stole the show. The one-year-old is very active and seems to keep Arie and Lauren on their toes.

The Bachelor couple rejoices over Lauren’s pregnancy on YouTube

On May 30, 2020, Arie and Lauren posted a video on YouTube to document their miscarriage experience. At the beginning of the video, Lauren shows Arie the positive pregnancy tests. The couple is excited to invite a new member into their family.

Before the Bachelor couple found out about the miscarriage, they’d been preparing for their new baby. They even bought a new house to make room for baby number two. Arie and Lauren told their first daughter, Alessi, that she was going to be a big sister.

Lauren and Arie start to worry

Lauren prepared for her first doctor’s appointment for the baby. Going into the doctor’s office, Lauren was both excited and nervous. Due to the pandemic, Arie wasn’t allowed to be in the room for the ultrasound. Lauren was supposed to be about eight weeks along, but it appeared that the baby had only been conceived five weeks before the appointment. The doctor told her that everything looked normal otherwise. However, Arie and Lauren still worried.

The doctors tested Lauren’s hormone levels to see what else they could find, and things still seemed good. This relieved the couple’s concerns. Unfortunately, their worries returned when the baby didn’t grow much before the next appointment.

A few weeks later, Lauren went back for a third doctor’s appointment and found out that the baby didn’t make it. The Bachelor couple feels that it is important to share their story amidst their grief.

Check back with TV Shows Ace for more updates on your favorite shows!