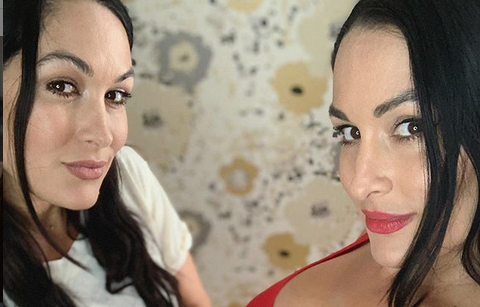 In an exclusive interview with ET, twins Nikki and Brie Bella of Total Bellas talk about their pregnancy journeys and the upcoming births of their new babies. Their due dates are just weeks apart, and both sisters say they’d like to film their childbirths. They also discuss baby genders and names.

The Total Bellas stars share details about their pregnancies

Both Nikki and Brie have been showing off their baby bumps on Instagram over the past few months. After comparing their bellies in the interview with ET, Nikki points out that Brie has the bigger bump. The Total Bellas sisters both expect to meet their new babies sometime in the next couple of months.

Although Nikki’s and Brie’s due dates are about a week and a half apart, their babies weigh the same and have similar heartbeats. So, Brie says that she thinks they might go into labor on the same day.

Nikki experienced a recent pregnancy scare. The doctors noticed a speck on the baby’s heart and wanted to investigate. After testing, they determined that the baby is healthy and normal. Nikki and her husband, Artem Chigvintsev, are thankful that their baby is doing so well.

Who is the more prepared mom?

When asked whether they’re ready for their little ones to arrive, Nikki says that she and Artem have started packing. However, she admits that Brie and her husband, Daniel Bryan, have things together more than Nikki and Artem do. Brie, who already has a daughter, points out that things are easier the second time around.

Next, Total Bellas star Nikki shares the story of when she and Artem took a test drive to the hospital. Artem refused to use a GPS and the couple ended up lost. This resulted in a longer trip than expected. Thankfully, it was only a trial run. Nikki now has the hospital saved as a contact in her phone so that she can ask Siri for directions to the hospital when the day comes. She got this helpful tip from her more experienced sister.

The twins plan to film their babies’ arrivals

Both Total Bellas stars want to have videos of their births. However, due to the pandemic, there is a limited number of people allowed in the birthing room. While Nikki would like to have both Artem and Brie with her for the birth of her first child, she might only be able to have Artem there for support.

Brie, who plans on having a natural birth, invited the filming crew to document her childbirth. However, if this isn’t allowed by law on the day her baby arrives, she plans to ask a doctor to take videos for her.

Brie and Daniel have decided to wait until their baby is born to find out the gender. Their three-year-old daughter, Birdie, wishes for a little sister. Brie and Daniel want all of their children’s names to start with the letter “B.” The Total Bellas star reveals that if they have a boy, they want to name him after her husband’s late father. However, the couple doesn’t quite agree on girl names. They are still in search of a girl’s name that they both love.

Nikki and Artem know their baby’s gender but have not yet revealed it to the public. They also have a name picked out for their little one. Nikki explains that because Artem is Russian, they have to follow Russian tradition when it comes to names. This means that the baby will have Artem’s middle name, regardless of the baby’s gender. Nikki admits that it was difficult to find a name that flows with Artem’s middle and last name.

Do you think Nikki and Brie will have their babies on the same day? Let us know in the comments and check back with TV Shows Ace for more updates.