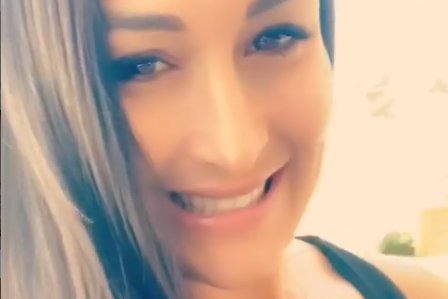 In January 2020, Total Bellas star Nikki Bella announced that she was pregnant. She is now 32 weeks along and has been showing off her baby bump on social media. On Thursday, June 11, the finale of Total Bellas will air on E! In this episode, fans can watch Nikki tell her fiance, Artem Chigvintsev, about the new addition to their family.

People shared an exclusive preview of the Total Bellas finale, in which Nikki tells Artem that he’s going to be a father. The video shows Artem picking a pregnancy test up off of a suitcase. Nikki then announces, “I’m pregnant.” Artem is in shock at first but then wraps his fiance in a hug and picks her up. Artem says, “It’s just unreal. I mean, I’ll be a dad.” Nikki and Artem are both clearly ecstatic to find out that they have a little one on the way.

Total Bellas star Nikki explains, “I’ve wanted to be a mom my whole life. But, everything that I planned out for the next five years just happened today.” She admits that she’s been worried that she and Artem should be taking things slower with their relationship. Artem proposed after going out with Nikki for about a year. Then, just months later, the couple found out that they’re expecting a baby. However, she’s excited about the baby anyway.

As soon as Artem hears about the baby, he wants to tell his and Nikki’s families. However, Nikki asks Artem not to break the news until they’re sure that the baby is healthy. After announcing her own pregnancy to Artem, Nikki tells him that her sister, Brie, is also expecting. Artem says, “This is amazing.” Nikki wanted to be careful to not steal Brie’s thunder by making an announcement about her baby at the same time. So, the couple waited before spreading the news to anyone.

What else will be on this week’s Total Bellas episode?

On Instagram, Nikki has been posting teasers about the Total Bellas finale. She showed off her baby bump in a video on June 8. In this video, Nikki says that they’ll reveal the baby’s gender in this week’s episode.

Then, on June 10, she created another post to spill more details of the episode. According to Nikki, the June 11 episode will touch on Artem’s proposal to her, as well as the couple’s visit to France. Nikki and Brie recapped the finale on an episode of The Bellas Podcast. Artem and Brie also posted clips from the new Total Bellas episode on their Instagram stories.

The finale of Total Bellas will air on E! on Thursday, June 11 at 9 p.m. ET. Check back with TV Shows Ace for more updates on your favorite shows.