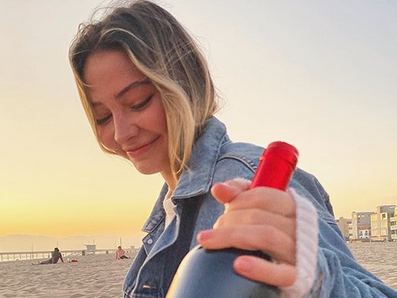 The “Kooks” from the popular Netflix drama, Outer Banks, are a tight-knit group of friends, on and off the screen. What began as a friendship between stars Chase Stokes and Madelyn Cline recently turned into a romantic relationship. Chase made their relationship public in an Instagram post on June 14. Additionally, Madison Bailey recently announced that she’s dating UNC basketball player Mariah Linney.

Chase, who plays John B on Outer Banks, took to Instagram to show off his girlfriend. The post included two pictures, one of the couple’s beach picnic and another of Madelyn holding a wine bottle. He captioned the post, “cats outta the bag,” and added a heart emoji.

Madelyn responded with a couple of comments. First, she said, “Topper punching the air rn,” referring to her fictional lover in Outer Banks. Then, she followed this comment up with, “I’ve fallen and I cant get up.”

The other Outer Banks stars commented as well. It seems that they’re all supportive of this relationship. Jonathan Daviss, who plays Pope in the show, said, “Well it’s about time,” with a few heart emojis. Other celebrities and fans also express their love for the new couple. Several users claim that they’ve seen this relationship coming since the beginning of the show.

How did this relationship begin?

The Outer Banks kids are close in real life and seem to hang out often. Chase and Rudy Pankow, whose character is JJ, bought a house together around the time they began filming. Since then, they’ve hung out there with the rest of the crew nearly every weekend.

Although it’s unclear exactly when Chase and Madelyn began dating, Chase admitted in April that he’s been quarantining with Madelyn, Rudy, and their co-star Drew Starkey, who plays Rafe on Outer Banks. After hearing this, fans speculated that there was something going on between Chase and Madelyn. However, the two have always been close, so this came as no surprise to their followers. Some fans even say that their characters’ relationship in the show gave it away months ago.

Madison, who plays the role of Kiara, recently announced that she is pansexual. She posted a video on TikTok to explain what this means, as she claims that many people are uneducated about sexuality. After this, she posted another video with her new girlfriend Mariah. She captioned the video, “Surprise,” with a heart emoji and tagged Mariah.

Madison then took to her Instagram story to share one of Mariah’s recent posts. Mariah’s post has three pictures of the new couple, one of which shows her and Madison with their arms wrapped around each other. Madison and Mariah seem just as happy together as Chase and Madelyn.

What do you think of these new Outer Banks relationships? Let us know in the comments.