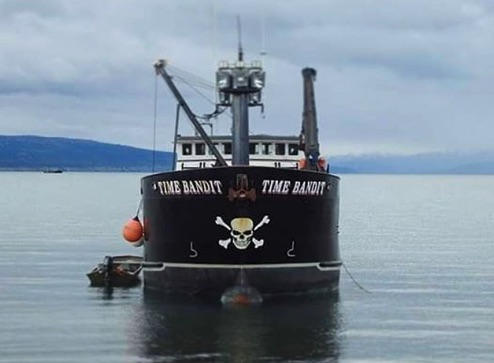 In the Deadliest Catch Season 16, Captain Johnathan Hillstrand has been and on the F/V Saga, mentoring Captain Jake Anderson. But, what has become of the Hillstrand family boat, the F/V Time Bandit?

Captain Johnathan Hillstrand was a surprise and welcome addition to Deadliest Catch Season 16. His mentoring time with Captain Jake Anderson has been very entertaining. Because it has been a double captain season, the F/V Saga has been at least temporarily renamed the F/V Saga-Bandit. But, what has been going on with the F/V Time Bandit?

This is the crab and tendering boat that has been part of three generations of Hillstrand’s. It was named the “Time Bandit,” because it “steals your time.” There has always been a sort of pirate-themed craziness with this particular crab boat. Between the Hillstrand fireworks and the many pranks, this was more than a crab boat. This was a lifestyle brand. The brothers Hillstrand, John, Andy and Neal have been a huge part of the Deadliest Catch.

It is no surprise that they are fan favorites, with their good natured antics and fun spirit.

Although Captain Johnathan has updated Deadliest Catch fans on what the F/V Time Bandit is up to, he has never explained anything about the absence of the boat from the show. For one thing, the famed crab fishing boat went up for sale over a year ago.

According to Dock Street Brokers, the boat is still up for sale. The price of the F/V Time Bandit is still  $2,888,888. As the Hillstrands have not spoken about the boat sale, we don’t know why the price is this usual amount. Eight must certainly be a lucky Hillstrand number.

The 113’x28’x7′ F/V Time Bandit was built in 1991. Recently, they have updated the galley, berths and four of the staterooms. Now, it just needs the right owner. But, maybe Captain Johnathan can still take it out for one more crab fishing season? Fans can only hope.

Captain Johnathan also revealed to Deadliest Catch fans that he wants to hit that 40-year crab fishing milestone. Sure, he officially “retired” a few years back, in a blaze of glory. But, the former F/V Time Bandit captain wants to hit this incredible milestone.

Hillstrand has even shared that his younger brother, Captain Andy Hillstrand, is interested in going back to the Bering Sea and fish for king crab.