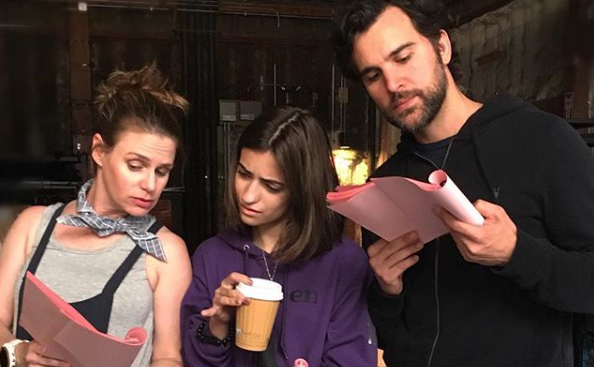 Juan Pablo Di Pace believes Fernando and Kimmy Gibbler have more story to tell after the Netflix reboot of Full House came to an end. Would fans be on board a Fuller House spin-off starring Andrea Barber and Juan Pablo Di Pace? Well, chatter in fan groups of the show on Facebook certainly suggests they aren’t ready to give up the show just yet.

Juan Pablo Di Pace is completely onboard for a Kimmy and Fernando spin-off.

The actor sat down with Hollywood Life exclusively to confirm he would be onboard for a spin-off starring his character and Kimmy Gibbler. Apparently, he just isn’t ready for the chemistry between Fernando and Kimmy Gibbler to be over.

I would work with those people in a heartbeat again! I would love to work with Andrea Barber again. She and I have this chemistry that we sort of don’t want to let go of, so it would be amazing. I would love to see how these two came to be on a spinoff or something. We will see what happens. After people binge-watch this, then the powers that be can say… wait a second.”

Juan Pablo Di Pace believes after the “powers that be” see the ratings the final season brings in… They may just change their mind on pulling the plug more Fuller House content. At the very least, he fully supports the idea of a spin-off.

Who wants to get married? #fullerhouse

Kimmy and Fernando were one of the more popular couples in the reboot.

There is a quintessential love for each other that will never go away, and we sort of have seen that blossom more and more in each season. Having started with a really rocky beginning and him being unfaithful to her, I think that just made it stronger and people fell in love with these two, so I think it will be happy [for them]. I imagine them as grandparents in some ways.”

As those who followed the show know… Fernando and Kimmy share a daughter together. Ramona. Could the spin-off include Kimmy and Fernando having a second child?

Juan Pablo teased a “little Fernando” could be just what the story line needed to continue to move forward.

The actor felt the end of the series was ‘bittersweet’

Now, Juan Pablo Di Pace has not been with the Full House and Fuller House cast as long as everyone else. But, he fit right into the cast. Moreover, the actor gushes about how great it was to work with everyone. Unsurprisingly, he was sad to see the reboot come to an end.

Five years on a show is not a simple feat at all nowadays. To even have 2 seasons is kind of miraculous, but to have 5 was incredible and great. It was a great half of ten years. That is a long time. With these awesome people, to laugh every single time we were on set, to bring laughter to people in their houses, it is bittersweet because when something is good you don’t want it to end.”

The actor admits he’s developed great friendships with his cast mates. And, he’s bummed he will not get to see them daily.

“…who knows, it might just come back as Fullest House or Even Fuller House.” He concludes.

Would you watch a spin-off featuring Kimmy and Fernando?

Savannah Chrisley Spills Secrets To Her Perfect Complexion
‘Bachelorette’ Fans Asked, We Answer: What Does ‘Sex-Positive’ Mean?
Can Romance Be Rekindled? Find Out In Lifetime’s Thriller ‘Lethal Love Letter’
‘LPBW’ Matt Roloff Making The Rounds Like A Rockstar
‘Love After Lockup’ Spoilers: Why Was Courtney Arrested?