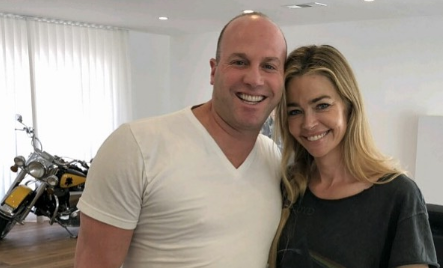 On The Real Housewives of Beverly Hills, Denise Richards made some comments on a previous episode, she didn’t like the girls talking about threesomes around her kids. Some of the girls gave her a hard time saying she didn’t use to be so uptight. The girls called her a hypocrite referencing some things she said in the past.

Lisa Rinna was especially offended saying she didn’t understand why Denise was being uptight about their language when she’d talked about her husband’s member with them. She said, “I feel like you’re using the kids to make us somehow feel bad.” Then she asked Denise if she’d told the girls about Charlie Sheen’s hookers. The whole thing seemed very uncomfortable for Denise. Fast forward to the latest episode and the RHOBH crew had a BBQ at Kyle Richard’s house. Denise didn’t bring her children.

There were children present at the BBQ. Dorit Kemsley, Garcelle Beauvais, and Teddi Mellencamp Arroyave all brought theirs. She said the girls went to sleepovers when the other housewives questioned their absence. As the night wore on, the girls drank a little more and the truth came out. Denise had purposely not brought her children.

Best place to have a layover on my way back to La. .. my favorite hotel in London. thank you @claridgeshotel for accommodating me last minute. And as always a fancy schmancy breakfast. Wish my layover was a tad longer💕

After some wine, Denise Richards told Garcelle the move to not bring her kids was intentional. It stemmed from not wanting her kids to hear their conversations. Kyle in her way heard what Denise said and asked her to repeat it.

Denise honestly said, “I got the note that the kids should not be within earshot of us. So, they’re not here.” Kyle said she didn’t want her to feel like she couldn’t bring her kids. Teddi weighed in and said, “you’re no longer comfortable bringing your kids in our presence?”

According to The Blast, Denise told her she didn’t say that. Then Kyle claimed Denise shamed them while Teddi expressed she was making them look bad. It seems fans are siding with Denise on this one.

Fans came to Denise Richards’ defense on Twitter. One user said, “Kyle’s issues with everyone else are her insecurities. She’s a bad mom and she doesn’t have anything worthwhile to do so far.” Kyle Richards responded to that user saying, “hehehe you’re funny.”

Another user said, “holy s**t, Kyle, this whole defense that Denise is calling you bad moms, is YOUR issue. You’re reading that into this whole argument.” Fans can’t understand why the ladies don’t get Denise doesn’t want them talking dirty in front of her kids. It seems like a reasonable request to them. Some fans now think they know why Denise is at odds with her castmates and where the rumors about her leaving came from.

Make sure you don’t miss new episodes of The Real Housewives of Beverly Hills on Bravo.