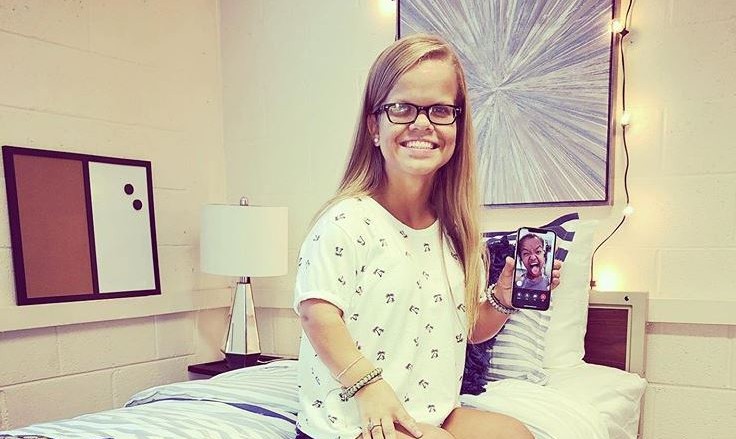 Leave it to Anna Marie Johnston to create the most memorable, funniest, and most tender finale of 7 Little Johnstons. It’s apparent that Anna has gotten used to the idea of moving away to college at North Georgia Technical College, and now it’s mom who is surprised by her daughter’s independence.  A new adventure launches for Anna and all the 7 Little Johnstons clan as the  bird leaves the nest. Wardrobe and décor are totally different matters entirely for Anna.

“I’m going to college, I’m not dying,” the daughter declares.  She makes the same declaration later, followed with “But why am I hungry?”  The tears, laughter, and tenderness in the June 2 finale episode, “I’m Not Dying” will live in fans’ hearts forever.

When Anna gets her packet on preparing for on-campus life, Amber stresses the four pages on drinking prohibition before getting to dorm room essentials.  Still, the 7 Little Johnstons ladies jump in the SUV for a full-on shopping trip.  As Amber well knows, Anna is delightfully deadpan.  “If you said ‘Here’s $10,000,’ Anna would just say OK” as if it was a stick of gum.   It’s not surprising that the middle daughter isn’t much on fashion design for her new digs.

“You want brown towels?” Mom quizzically asks at one point.  Hey, at least they don’t show dirt. As Anna continues her beautifully Bohemian ways of choosing items here and there,  Amber, Elizabeth, and Emma guide their 7 Little Johnstons sister to a grey-gold-silver color scheme.  Amber insists on a few photo frames “to remember the people who got you here.”   Emma thinks that an alligator chair is a perfect addition, and she surprises Anna with it during an interview segment.

A dressy debate for the ‘7 Little Johnstons’

Anna doesn’t really want too much help with packing clothes.  It still takes four of the 7 Little Johnstons anyway.  She chooses her very colorful jacket, and one of the cutest exchanges comes when she calls a ruffled T-shirt “dressy.” The entire definition of “dressy” becomes a topic of debate between Trent and Amber.  Amber jokingly declares that “dressy” only applies if the bellybutton shows.

“I put in enough underwear and a bra,” Anna defends of her clothing choices.  There’s nothing over-the-top about this new girl on campus.

Amber is truly surprised when Anna announces that she doesn’t plan to come home every weekend, being just two hours away.  Anna had very different feelings just weeks ago, but she seems to be settling into her new territory of independence.

Jonah will be the “commuter student” from home this year.  Jonah has had his own struggles, as Daily Soap Dish details on June 2, but in a very open-hearted sibling conversation, the older brother pledges that he will be there for his sister any time.  He encourages that “you’ll have no trouble making straight A’s” and to not “wait until the last minute” if she needs his help.

Anna and Jonah admit that they don’t always express the depth of their bond, but it’s always there.  “We get each other,” Anna confirms.  Jonah says that not just “half the slate is wiped clean, it’s the whole thing.”

Jonah will be able to focus his full attention on vocational and future success.  He will not be doing drop-off and pick-up duties on a regular basis for the 7 Little Johnstons.

7 Little Johnstons get Anna moved in and moving on

The family throws a pork chop feast for Anna as a farewell dinner.  Anna declares that pork chops are “dry” but dad Trent enjoys preparing one of his specialties.

The next morning, Alex and Emma wake their big sister up with sirens and a bullhorn for her big day, which is another school day for them.  Mom, dad and Anna head down the road to Anna’s academic future.

It's time for Anna to leave the nest. She'll be alright… but how will Trent and Amber take it? Tune in to the SEASON FINALE of #7LittleJohnstons tonight at 10/9c. pic.twitter.com/gj6LNvn4eN

Anna’s roommate, Kaitlyn, her grandmother, and her friend are already moved in when the 7 Little Johnstons patriarchs and their daughter arrive.   The greetings are very cordial, even with Trent’s teasing.  Mom and dad go to work like machines to get the room put together and make it like home.  Trent even crawls under the bed to lift it with his legs so a rug can roll underneath.

A mother’s dream for more

In a very candid and tender moment, Amber remembers the difficult times with Anna, who came from Russia with “no language,” neither Russian or English and who was functioning at about a 12-month-old level at five years old.   Moms and daughters can often get testy, but the love is deep and real.  Amber relates how she just wanted to grab her daughter at times, to tell her “You’re so much more!”

Now, Anna has her chance to become all of the “more” her mother and father have pushed and dreamed for her.  Amber has a mother’s worry when Trent asks if she thinks Anna will make it through the weekend.   Before they leave, Trent and Amber deliver a small refrigerator and a bit more before sweet hugs goodbye.

We did, we do. She did great her first year, has been home since mid-March taking classes online! https://t.co/HGEshGJ1hT

A closing check-in shows Emma having face time with big sister.  The words said don’t matter nearly so much as the moments eye-to-eye, and everyone in the family drops in to make sure that Anna knows just how loved she is by all her 7 Little Johnstons.

Anna’s undergraduate adventure would be a wonderful spinoff to the family’s reality TV story.  No script would be needed—all Anna would be just fine. Once COVID-19 concerns have been eradicated, Anna’s and other students’ college experiences can continue.

Carlin Bates DRAGGED For Making Everything About Herself
Eureka, Missouri Celebrates ‘The Bachelor’ 2022 Clayton Echard (Video)
Duggar Fans Appalled By Jason’s Response To Natural Disaster
‘Welcome To Plathville’: Is Ethan Unhappy With Who Olivia Is Becoming?
Lisa Rinna Struggled To Support Amelia Hamlin And Scott Disick