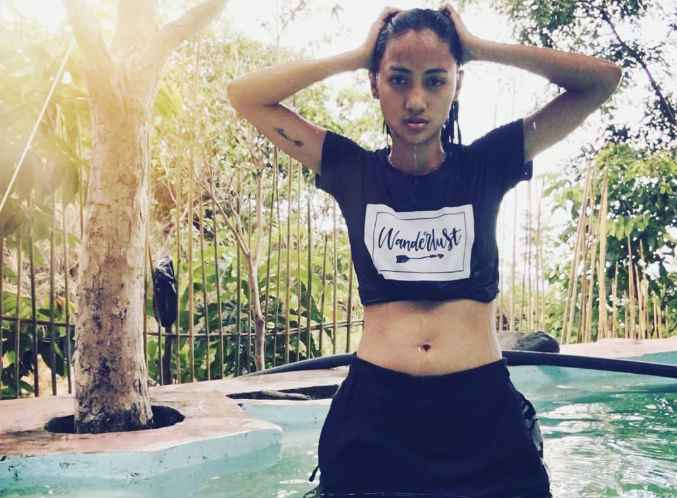 After everything that has happened to her during this season of 90 Day Fiancé, Rosemarie Vega is now living her life to the full. While in quarantine with her family, she is having a lot of fun. It looks like she is not missing her former boyfriend Big Ed one bit. Rosemarie proves this by posing a series of images to Instagram, where she looks positively free, wet, and a little wild!

The TLC reality star is living out the COVID-19 lockdown with her family in the Philippines. Rose shares a sexy image on Instagram of herself standing in a pool. Holding back her wet hair, she poses like a model in a black shirt, tied with a knot.

Rose’s caption reads, “Your beauty is define [sic] by you and not by others.” She also writes that life is too short to not appreciate “the beauty of your surroundings.”

Rose posts a second image of herself in the pool, taken from the side and with the same caption.

As noted by The Blast, Rose and Big Ed are both single and looking after a nasty breakup. Fans got to see their relationship on 90 Day Fiancé, right up to the season finale episode on Sunday, May 31.

The drama of Big Ed and Rose

Rose went through plenty of drama with American Big Ed. Among other things, Ed asked her to take an STD test, wanted her to shave her hairy legs and told her she didn’t have “pretty breath.” These are not really statements you want to hear from someone who allegedly loves you!

On top of this, while Rose had told Big Ed from the start that she wanted children, he lied to her. This came out when he told his Filipina girlfriend he was going to have a vasectomy. Rose also took exception to how Ed spoke about her and her family in his confessionals. Along the way, Rose regularly went to Instagram to tell fans not to believe Big Ed because he lies.

Rose says at the time that Big Ed doesn’t really care for her and her son. He just wanted to be famous on TV. The only gift he ever gave her was a bra and panties. Moreover, Rose says everything that came out of Ed’s mouth was a lie. He didn’t tell her how short he is, for one thing.

Rose has shown herself as a woman who knows her own mind. Surely fans can agree she is better off without Big Ed and has everything to look forward to in life.

Are Joe & Kendra Duggar At Odds With Jim Bob Because of Josh?
‘Welcome To Plathville’ Season 3 Premiere Date & What To Expect
‘LPBW’ Wait! Is Molly Roloff Headed Back To The Show?
‘Bachelorette’ Preview: Katie Warns Clout-Chasers To Get The Eff Out
They’re Here! Arie Luyendyk Jr. & Lauren Burnham Welcome Twins