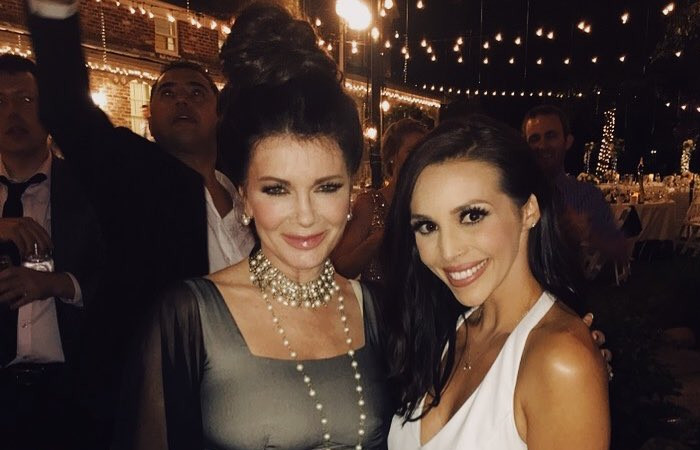 Was Lisa Vanderpump complicit in the editing scandal that rocked Vanderpump Rules earlier this month? Scheana Shay opens up about the time she approached Lisa only to have the SUR boss shut her down.

Scheana Restates That She Wasn’t Jealous of Max, Was Unhappy With Editing

However, Scheana has said several times since then that she wasn’t jealous. She recently guest-starred on Better Together with Maria Menounos. Scheana opened up about the editing scandal she was at the center of earlier this month.

An editor with VPR, Bri Dellinger, spoke on a podcast about how she would purposely edit Scheana in the worst way possible. The editor was promptly fired.

When Confronted, Lisa Told the VPR to ‘Be Professional’

Scheana revealed to Maria that she tried to talk to Lisa about the situation but sources indicate that she didn’t get a good response.

According to Scheana, Lisa herself kept calling Scheana jealous about Max while cameras were filming the conversation. Once filming stopped, Scheana says she approached Lisa about it, but Lisa shut her down.

The SUR boss reportedly pooh-poohed Scheana’s concerns by saying, “Oh please, stop it. Be professional. Do your job. Stop breaking the fourth wall.”

As a result, Scheana kept silent about the bad editing but felt that something was going on. It turns out Scheana was right.

The VPR star recently called out her co-stars for turning a blind eye to how Scheana was portrayed because they were getting good edits.

Scheana’s Podcast Gets a New Home

As VPR fans may know, Scheana has her own podcast, Scheananigans. Part of her complaints about the editing is that they never showed her projects outside of SUR. On the other hand, newbie Dayna had her stand-up career featured twice.

In Scheana’s view, that was “unfair” since it is Dayna’s first season and Scheana’s 8th.

So, to combat viewers seeing very little of her real life, Scheana started a podcast and a YouTube channel.

Her podcast recently moved to a new provider – Action Park Media Group. She celebrated with a shoutout post on Instagram. The CEO and founder of the company is none other than Entourage actor Kevin Connolly. You can find Scheana’s podcast here.

y’all I’m so excited to announce that @scheananigans has a new home with @actionparkmediagroup and @mrkevinconnolly! New episode is up now! Link in bio. New vlog coming soon tooooo

Tell us in the comments if you think Lisa was wrong not to have Scheana’s back.

The Vanderpump Rules Season 8 reunion starts on June 2 on Bravo. The reunion was filmed before news of the editing scandal came out, so it may not be addressed during the reunion.

Watch the full Better Together interview below.