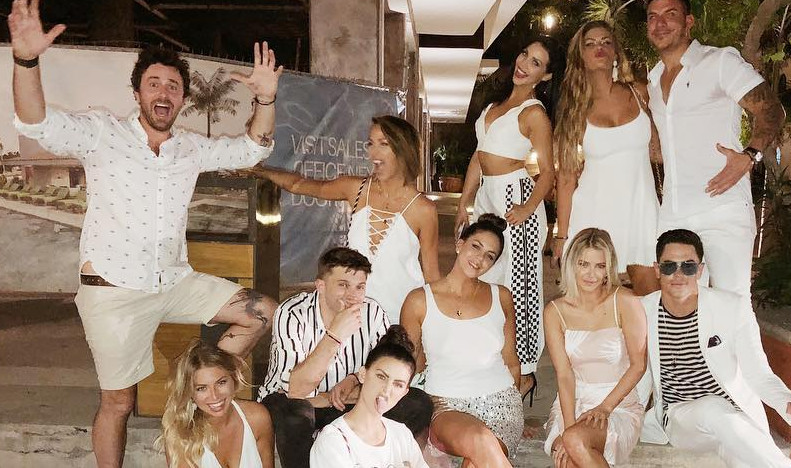 Opening the floodgates! After weeks of silence, Vanderpump Rules star Scheana Shay is making the interview rounds to open up about the recent editing drama.

As fans know, Bri Dellinger, an editor on the show, admits to going out of her way to make Scheana look bad. The editor has since been fired, but not before dropping an epic ‘f u’ letter to the VPR cast and her critics.

VPR Star Admits She Was ‘So Upset’ By Editor’s Behavior

The Vanderpump Rules star video chatted with Maria Menounos on her Better Together podcast on Wednesday, May 28. Scheana laid out for Maria how she felt when the editing scandal broke on the internet a few weeks ago.

In a different podcast earlier this week, the VPR star revealed how her boyfriend, Brock Davies, convinced her to wait a bit before responding publicly. TV Shows Ace reports that the scandal caused a big fight between the two, but Scheana ultimately took his advice.

Similar to her earlier comments, Scheana says it ‘feels good” to be vindicated. She says, “I may be boy-crazy but I’m not just crazy.”

Scheana reveals to Maria that the VPR editor “broke her agreement” with Bravo, possibly referring to the NDAs the cast signs.

Scheana Agrees That Fired Editor is a Scapegoat

In her exit letter, Bri points out that she didn’t edit the show alone. She advises fans that there will always be someone else to take her place to do the same shady edits. Scheana agrees with the editor about that.

One of the biggest editing gaffes that caused outrage among fans was Scheana appearing to hit on Stassi Schroeder’s teenage brother. She didn’t actually hit on him.

As Bri admitted in the podcast, she asked Scheana a question about how young she would date. The editor then purposely inserted it in footage of Scheana conversing with Stassi’s brother.

Fans calling Scheana out as being inappropriate even got Stassi’s attention. She took to Twitter to assure Scheana that she knew the situation was “harmless.”

Girl, you were harmless. And watching that scene had me rolling. Whoever’s saying it’s inappropriate is a weirdo. @scheana https://t.co/EFzbU4bmC3

However, Scheana points out to Maria that someone higher up than Bri approved the footage. She says,  “[Bri’s] not the final call. Someone still has approved this. Someone still said, ‘Oh, my God, yeah Bri, we think this is a great idea.’”

Scheana notes that it was probably “several people” who approved the final edit.

As for why Scheana thinks she was targeted, she says it’s because she’s “too nice.”

However, next season, fans and the VPR cast will see a new Scheana. She tells Maria that next season she will be more “outspoken, confident and secure.”

In fact, she warns her co-stars that since no one worries about hurting her feelings, she will no longer worry about hurting theirs.

Scheana Calls Out Her VPR Co-Stars For Being ‘Selfish,’ Not Caring About Her Bad Edits

Us Weekly reports that Scheana complained to her co-star off-camera about her portrayal on the show. However, “nobody cared,” she said on the Better Together podcast. According to Scheana, since everyone else was getting good edits, no one cared about her bad edits. She says,

“We tend to be in a group of very selfish people who, you know, they care about themselves and how they look and once that looks good … [They say] ‘I’m getting everything I want, so I don’t care.’”

Well, fans care. Even before the editing scandal came out, fans were demanding #JusticeForScheana for her Season 8 “boy crazy” edit.

You can watch Scheana’s full interview on Better Together here. She joins the chat around the 24-minute mark.

Tell us in the comments if you think the VPR cast should have spoken up on Scheana’s behalf. Don’t forget to tune in to the Season 8 virtual reunion beginning June 2 on Bravo. Check out a preview below.