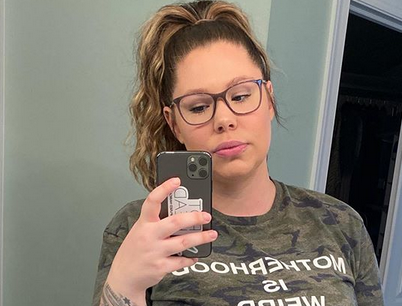 While shopping to prepare for the birth of baby number four, Teen Mom 2‘s Kailyn Lowry tweeted about how expensive babies are. Kailyn has three sons, one of whom she shares with her ex-boyfriend, Chris Lopez. Chris is also the father of Kailyn’s fourth baby, who she is pregnant with now. In response to a fan’s comment, Kailyn mentioned that Chris is not financially supportive. In fact, he claimed their son, Lux, on his taxes, even though Kailyn has primary custody over Lux.

Teen Mom 2 star Kailyn is apparently planning on buying a new stroller and car seat for her baby. On May 27, she tweeted, “The stroller I want is $900. Wtfffffff.” Fans commented, asking which stroller she’s looking at. After clarifying that it is a Nuna brand stroller and car seat combo, parents shared their thoughts.

Some users said that they recommend that brand or similar high-end brands. However, others tell Kailyn not to waste her money. One mom commented, “I got mine for 10 bucks at a yard sale 3 years ago and looked brand new and is still in perfect condition.” Others joke that the stroller better push itself if it’s worth $900.

A few Teen Mom 2 fans question whether Kailyn actually needs a new stroller and car seat. They note that she should already have everything she needs since this is her fourth pregnancy. Kailyn explains, “I don’t. Lux hasn’t been in a car seat/stroller for a long time so I gave his away.” However, some users still think Kailyn is irresponsible for spending close to one thousand dollars on a stroller amid a pandemic.

Because the baby is Kailyn’s and Chris’s, fans ask Kailyn why he isn’t helping cover expenses. One user tweeted, “Have Chris buy it for you.” Kailyn replied, “I should since he claimed lux on taxes and for stimulus for him,” and tagged Chris. This tweet provoked several responses, in which people ask how Chris got away with all of that.

I should since he claimed lux on taxes and for stimulus for him. @chrisxlopezz https://t.co/7chy3SxKjj

When asked how Chris got Lux’s social security number, Kailyn claimed that she had no idea. Others told Kailyn that she can report the incident to the IRS and get her money back. There are several reasons that Chris should not be allowed to claim Lux on his taxes. For example, in order for a parent to claim a child on a tax form, the child must live with the parent for at least six months.

The Teen Mom 2 star also received several negative responses to her tweet. Critics say that Kailyn shouldn’t have had a second child with a man who has been absent for most of their first child’s life. Furthermore, they think that she should have avoided Chris in the first place. One user says, “You asked for it, you got it!” Kailyn ignored most of the negative tweets but replied to the supportive comments.

What do you think about Chris claiming Lux on taxes? Should Kailyn try to get the money back? Let us know in the comments.