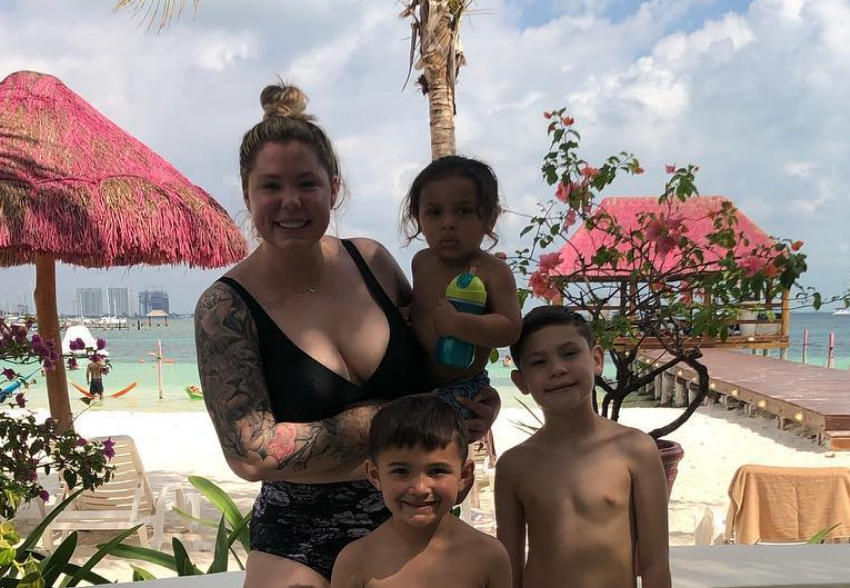 Teen Mom 2 star, Kailyn Lowry, has mentioned in the past that she wants a big family. In a recent comment on an Instagram post, she alludes to wanting more kids after baby number four. Kailyn is a mother of three sons – one with ex-boyfriend Jo Rivera, another with ex-boyfriend Javi Marroquin, and her youngest with her present boyfriend, Chris Lopez. She’s pregnant with her fourth baby, who is also Chris’s. Fans now wonder if there is a baby number five in Kailyn’s future.

Baby Boy & I are coming up on 29 weeks & so thankful to be in our third trimester! 🙌🏼 He still doesn’t have a name, but this is the chaos, it’s how we do things. 🤪 He is currently breech, so hopefully he decides to turn soon, because we’re running out of room! He’s moving a lot more these days and likes to keep me up at night. Physically, this has been a really easy pregnancy, but it is getting a little harder to hold Lux, no real complaints. Emotionally, this has probably been my toughest pregnancy. We’ve been keeping busy at home- planning and decorating his nursery, I can’t wait to show you the finished product! Do you think he’ll turn in time or stay breech?

Kailyn, who is pregnant with her fourth boy, has always wanted to have a daughter. In February 2020, Kailyn revealed that she has a name picked out for a baby girl, but she’s keeping it a secret. She playfully added that she may have enough kids to start a basketball team before she gets a girl.

Later, Kailyn tells fans that her doctor offered to help her with gender selection. She seems to be considering this option so she can fulfill her dream of having a baby girl. Teen Mom 2 fans are rooting for Kailyn, hoping that she has a girl next. On her Instagram post about baby number four, fans left comments like, “No girl yet?? Maybe next one but he’s still a blessing.”

It seems like Kailyn would want to keep trying for a girl. However, after she had her second son, Lincoln, Kailyn said that she was done. This was while she was dating Javi, who made her think that her miscarriage was her fault. This, in addition to their other relationship problems, discouraged Kailyn from wanting more kids.

In an Instagram post, the Teen Mom 2 star admitted to having an emotionally difficult pregnancy with her fourth son. In the caption, she said, “Emotionally, this has probably been my toughest pregnancy. We’ve been keeping busy at home- planning and decorating his nursery.” Will this stressful pregnancy keep her from having more?

On her social media posts, Kailyn has hinted at wanting more kids. One curious Teen Mom 2 fan commented, “Do you plan on having more or are you done?” Kailyn replied, “I’m not getting my tubes tied or anything. So we’ll see.” On another post, one user called Kailyn out for changing her mind about having kids after she announced her third pregnancy. Kailyn responded by explaining that she felt better about having kids after she and Javi broke up. Based on Kailyn’s answers, it seems that she wants to keep trying until she has a little girl.

Do you think that Kailyn will have more kids after baby number four, or will this be her last? Let us know what you think in the comments.