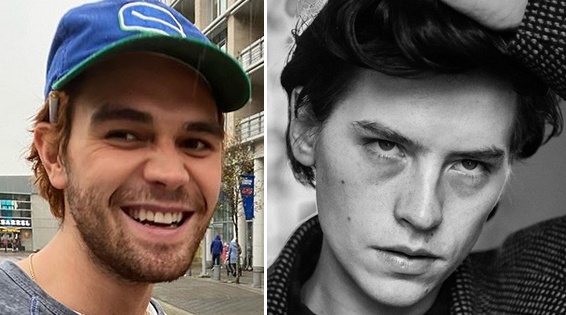 While many stars are spending quarantine with their significant others, Riverdale stars Cole Sprouse and KJ Apa decided to spend this time with each other. Entertainment Tonight interviewed Dylan Sprouse, Cole’s twin, to discuss Dylan’s new book, Sun Eater. However, the interview seemed to focus more on what KJ and Cole are up to during quarantine. Dylan mentions that his brother is doing well despite his recent breakup with Lili Reinhart. He also talks about the strong relationship the twins have.

According to Dylan, KJ and Cole have been “lifting weights and eating cheese.” Cole has been living with KJ in Los Angeles, California since the pandemic hit the United States. This has given the two Riverdale stars plenty of time to bond. Dylan tells Entertainment Tonight that he’s “heard a lot of cute stories” from Cole and KJ. He also notes that Cole is doing well and focusing on his health during this difficult time. He has also been relaxing as much as possible.

Dylan and Cole FaceTime each other every day to catch up. The two are in the middle of a brotherly facial hair competition. Based on Cole’s villain-like mustache, Dylan teases that fans can decide who they think the evil twin is. He says, “I mean, take that on its own merit, but he looks like a guy who ties people to train tracks, right? He needs a top hat and a monocle, OK? I look like a paladin warrior who upholds the law.” Dylan encourages fans to look up pictures of the twins and share their opinions on the facial hair battle.

Cole and Lili have been dating on and off since July 2017. In July 2019, the couple ended their two-year relationship. After this, they started dating and broke up again a few more times. They most recently got back together in September 2019. Because of their rocky relationship, fans are constantly wondering where the couple stands.

Their Riverdale co-star, Skeet Ulrich, broadcasted on Instagram Live with his girlfriend, Megan Blake Irwin, earlier in May. Both Skeet and Megan hinted that Cole and Lili had broken up when they referred to the couple in the past tense. Skeet said, “I think they were a very cute couple.” Megan agreed with this statement. However, neither Cole nor Lili have confirmed their split publicly. Since Cole and Lili aren’t quarantining together, it seems that their breakup occurred before the pandemic started.

Do you think Cole and Lili are done for good? Or, do you think will they make amends in the near future? Let us know in the comments and check back with TV Shows Ace for more celebrity news.