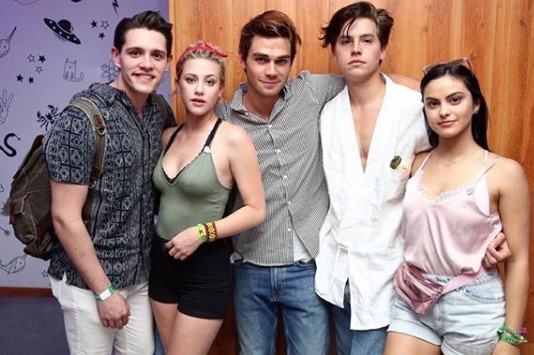 Riverdale Season 4 ended abruptly because of the coronavirus. Due to this sudden cut-off, the season ended on a huge cliff-hanger. This left fans eager to find out what happens after the prom episode. ET had an exclusive interview with Roberto Aguirre-Sacasa, creator and executive producer of Riverdale. In this interview, Aguirre-Sacasa divulges information about Season 5. He talks about how he wants the season to begin and what the story will be like.

Where will Season 5 pick up?

Aguirre-Sacasa tells ET that the Riverdale writers are still meeting via video chat. They want to pick up Season 5 right where Season 4 left off. Aguirre-Sacasa adds, “Usually time jumps happen in between seasons, but this is an extraordinary year and these are extraordinary circumstances. So, we’re trying to figure out if we are doing a time jump, how quickly we can do it.” He seems to be jumping between the ideas of shortening the time gap and eliminating it altogether.

However, Aguirre-Sacasa also brings up the idea of a four-year time gap. He says, “Since all of our characters would be going to different colleges, my instinct has been to leapfrog over four years, and kind of pick up with everyone there.” He also mentions wanting to throw in something unexpected for fans at the beginning of Season 5.

Aguirre-Sacasa explains that he’s been watching lots of teen shows during his quarantine. He’s hoping this will help him decide the best route to take. From what he has seen, about half of teen shows continue the story with college. The other half of the shows skip over college and jump to the characters starting their adult lives. Based on his own college experience, Aguirre-Sacasa is leaning toward starting Riverdale Season 5 after the characters graduate from college.

Riverdale Season 5 will be just as exciting as previous seasons

Riverdale is an elaboration of the Archie Comics series. Aguirre-Sacasa says that he wants to take this chance to change up the story a little bit. For four seasons, the show has followed the idea of Archie Comics, so he thinks it’s time for a twist. Riverdale Season 5 will feature a new mystery and loads of relationship drama.

Aguirre-Sacasa plans to continue the theme of the show while differentiating it from the other seasons. So far, each season of Riverdale has followed a different mystery for the characters and fans to solve. It sounds like Season 5 will have a mystery of its own. In addition to the mysteries, there has been relationship drama since the first episode of Season 1. Aguirre-Sacasa intends to keep the drama alive in Season 5.

How do you think Riverdale Season 5 will start? Will you be watching the new season? Let us know in the comments, and check TV Shows Ace for more updates.

Emmy Medders Celebrates Engagement: ‘My Heart Is So Happy’
WOAH! Fans Caught Off Guard By What Grayson Chrisley Is Hiding
Jenelle Evans Looks & Feels Fancy, Trolls Still Cut Her Down
Khloe Kardashian Considers Kanye West ‘Family’ Despite Kim K Divorce
What Exactly Does Jovi Dufren From ’90 Day Fiance’ Do For A Living?